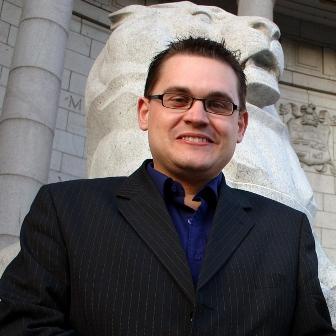 Music Department Professor of Composition, Professor Paul Mealor, has been nominated for two Classic Brit Awards for Composer of The Year and Single of the Year.

The winners will be revealed during a glittering ceremony at the Royal Albert Hall on October 2, hosted by Myleene Klass and featuring performances from Nicola Benedetti, André Rieu and Andrea Bocelli.

Professor Mealor topped the Specialist Classical Charts for six weeks with his bestselling album, ‘A Tender Light’ (featuring Tenebrae and the Royal Philharmonic Orchestra) in November 2011, he also broke records by being the first classical composer to hold both the classical and pop chart No 1’s at the same time in December 2011, securing the UK Christmas No 1 with his piece for The Military Wives Choir and Gareth Malone, ‘Wherever You Are’.

‘Wherever You Are’ entered the UK Pop Singles Chart at number 1 on December 19, selling over 556,000 copies in one week, more than the rest of the Top 12 combined.

It has been named, by the Official Charts Company as, the fastest selling charity single since Elton John’s ‘Candle in the Wind’. Also, in April of 2012 Mealor was voted the nation’s favorite living composer during the Classic FM Hall of Fame.

Born in St Asaph, North Wales in 1975, Professor Mealor studied composition privately as a boy with William Mathias and later with John Pickard, and at the University of York (BA, 1997, PhD, 2002) and in Copenhagen with Hans Abrahamsen and Per Nørgård. His music has been commissioned and performed at many festivals and by many orchestras and choruses and has been broadcast on every major TV and Radio station throughout the world. Since January 2003 he has taught in the Music Department at the University of Aberdeen where he is Professor of Composition.

Professor Mealor was catapulted to international fame in April 2011, when 2.5 billion people - the largest audience in broadcasting history - heard his Motet, Ubi caritas performed by the choirs of Westminster Abbey and Her Majesty’s Chapel Royal, conducted by James O’Donnell at the Royal Wedding Ceremony of His Royal Highness Prince William and Catherine Middleton (now TRH The Duke & Duchess of Cambridge) at Westminster Abbey. It since topped the Classical singles charts in the USA, UK, Australia, France and New Zealand.

In July 2011 Mealor signed to Decca Records – one of only a handful of composers to have been taken on by a major record label – and signed a publishing deal with Novello & Co. Mealor is currently preparing his second album of choral music for Decca and has contributed new works to a number of other Decca albums, including his new song ‘In My Dreams’ for X factor Star, Jonjo Kerr and The Military Wives Choir which entered the pop album charts at No 1. Mealor is currently working on a setting of The Passion for The National Youth Choir & Orchestra of Scotland, and a setting of Christopher Smart for The Rodolfus Choir, as well as a number of works for HM The Queen’s Diamond Jubilee.

Professor Mealor said: “I’m delighted and honoured to be nominated for these prestigious awards. It is a dream come true!”

For further details about the Classical Brit Awards visit www.classicbrits.co.uk/vote/