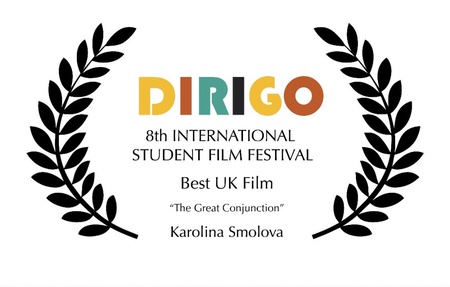 Anthony White and alumna Karolina Smolova, travelled to Bristol to attend a screening of their short film, which has received numerous awards in the film and television industry.

‘The Great Conjunction’ has received awards for best short script from the Sunday Shorts Film Festival, the Stockholm Film & Television Festival and won best director from Prague International Film Festival. On the day of the screening hosted by the Dirigo Film Festival at the Arnolfini Theatre in Bristol, the short film competed against 150 film submissions from across the world and was nominated for ‘Best UK Film Award’ prior to the festival. After a short list of 15 films that premiered at the Arnolfini Theatre on Wednesday evening, ‘The Great Conjunction’ was awarded ‘Best UK Film’.

The host of the event Will Stephens commented: “The judging team was very quickly drawn to the Great Conjunction, with the detailed set, captivating performances from actors Dave Lee and Chloe Brianne Panayi and the beautiful composition by Department of Music student, Anthony White."

Anthony said "As the composer, I enjoyed every moment of the post-production process, from the ‘spotting session’ with the director to having regular post-production meetings and creating individual themes for each of the characters. A big personal thank you to the incredibly talented production team that were monumental for the film's success. The production and post-production team consisted of both University of Aberdeen Alumni and the University of Greenwich film students, as well as, external experts in the film and TV industry that showcased that through teamwork, hard work and commitment anything is achievable."