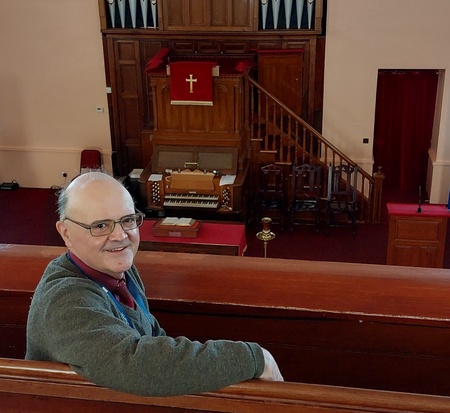 Notice of the premiere of a new composition in Doric, which is part of a PhD project undertaken jointly with the Music Department and the Elphinstone Institute.

Composer and native Doric speaker, Robert Milne, is creating a body of work featuring musical settings of Doric poetry, bringing the language to the concert hall, as part of a PhD at the University of Aberdeen.

Many Doric speakers of a certain age will remember that when they started school they were expected to speak “proper English” and speaking Doric in the classroom was liable to result in punishment. Doric was regarded as “sloppy English” or even slang. Happily, this attitude is changing and the use of Doric is now being more actively promoted.

Far from being “bad English”, Doric is a distinctive dialect of the Scots language, with many cognate words with languages found around the North Sea, and some specialist vocabulary due to Aberdeen having been a major centre of trade with continental Europe at least as far back as the fifteenth century.

It is said that the best way to preserve a language and to raise its status is to write it down and Doric’s written tradition extends from centuries ago to the present day. While Doric in the twentieth century was often associated with humour, it has always been capable of sincerely expressing serious emotion and drama. As Dr Tom McKean, of the Elphinstone Institute, University of Aberdeen, says, “Sheena Blackhall’s poetry and translations of classics such as Jane Eyre and Gordon Hay’s translations of the Bible showcase Doric’s immense capability and range.”

Musically, Doric is commonly associated with Bothy Ballads and humorous songs, but little, if anything, has been produced for the concert hall. In 2018, the Elphinstone Institute produced the Doric Messiah, pairing Handel’s timeless music with Gordon Hay’s powerful translation. According to Tom McKean, “the effect on Doric speakers was profound. Hearing the language of home and heart in the high-status setting of St Machar’s Cathedral was transformative.”

Milne aims to build on this transformative potential by setting works old and new, with a native speaker’s sensitivity to sound, intonation, and rhythm. His latest composition, “Sangs For Gyan Up”, makes use of Doric translations by Gordon Hay of verses from the Psalms. The work was commissioned by the Friends of Forgue Kirk to mark the bicentenary of the opening of the building.

The work will have its premiere at a special event at the Kirk, near Huntly, on Sunday 21st November at 3 p.m., exactly two hundred years since the building was opened.