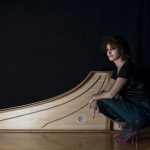 Her extensive discography of repertoire ranges from the fourteenth-century istanpitte and intabulations to – and beyond – the chamber music and solo concertos of the High Baroque and reflects the breadth of her musical interests and technical skills.

She leads a full life as a soloist, chamber musician and teacher, travelling regularly across Europe, both Americas, and the Middle and Far East.

Her ongoing research into aspects of the repertoire and reconstruction of late-medieval and early-renaissance keyboard instruments and recorders has contributed substantially to the present-day revival of these instruments. She teaches the next generation of early music performers at the Schola Cantorum Basiliensis in Basel, Switzerland, and in masterclasses worldwide.