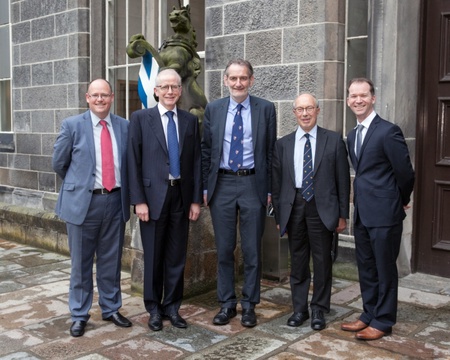 The lecture was organised to honour the memory of former UK Supreme Justice Lord Rodger, who died in 2011.

Up until his death Lord Rodger had made an annual trip to Aberdeen to lecture to students taking part in the Universities of Baltimore and Maryland Summer School in Comparative Law, which has been hosted by the University of Aberdeen for the past 30 years.

The summer school, which welcomes students from across the US, was for many years co-ordinated by former Head of the University Law School Professor David Carey-Miller, who enjoyed a close professional friendship with Lord Rodger and whose idea it was to inaugurate a series of lectures in his honour.

Professor Carey-Miller passed away earlier this year, but his idea was taken forward by colleagues at the Law School who welcomed Lord Reed and Lord Hope, former Deputy President of the Supreme Court, to the lecture which took place at King’s College Conference Centre on Friday July 15.

The theme of Lord Reed’s lecture – Judges and their Travels – saw him reflect on his experiences of international law, and express his view that Scots Law should not develop on the basis of the precepts of its founding fathers, but should learn lessons from legal systems around the world.

Dr Christopher Kee, Deputising Head of the Law School, said: “We were delighted to welcome Lord Reed and Lord Hope to the inaugural Lord Rodger lecture.

“Their experiences at the top of the UK legal system puts them in a unique position to observe the developing importance of international and comparative law in our legal system, which made for an informative and entertaining evening for all concerned.

“As well as providing the audience with insights based on their own careers, they both paid tribute to Lord Rodger and David Carey-Miller for their achievements and dedication to educating new generations of law students.  The success of our summer school programme, which is still going strong after 30 years, stands as a testament to their commitment.”