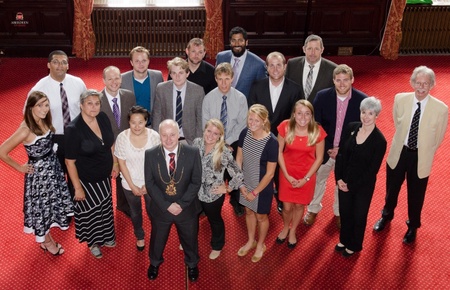 The 29th Baltimore/Maryland Summer School at the Aberdeen University School of Law will run from 6 to 31 July 2015.   The programme was initiated in 1987 by Baltimore and Aberdeen Universities, with Maryland University, also in Baltimore, joining a few years later. Courses meet ABA criteria to qualify as US law degree credits for admission to practice purposes.  All courses have a US and a Scottish coordinator and are taught on a comparative basis. Some 27 US students are participating this year.

The programme will include two visits to Edinburgh: one to the Court of Session and the Scottish Parliament building and a second to sit in on High Court trials being heard by Lord Pentland.

The attached photograph shows last year’s group on the traditional visit to the Aberdeen Town House for a civic reception hosted by the Lord Provost.