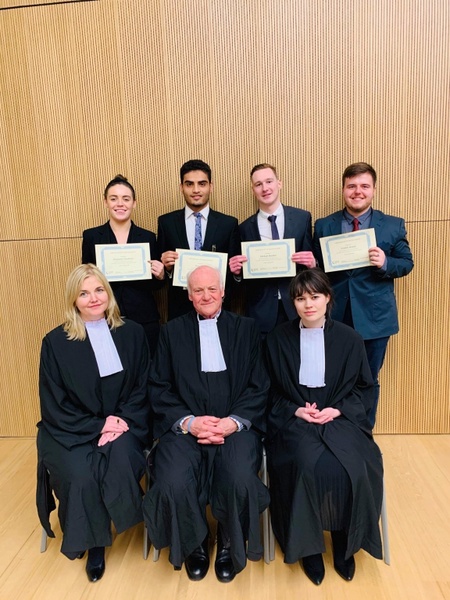 The Aberdeen Law School team participated in the UK qualifying rounds of the the Philip C. Jessup International Law Moot Court Competition, an advocacy competition for law students. For the first time, our team won the award for best written memorial and progressed to quarter-finals. We congratulate the team members, our LLB students, Elizabeth Cheetham, Vojtech Senjuk, Israr Khan, and Michael Hackett (captain), and their coach Dr Daria Shapovalova, on their success.

Jessup is the world's largest moot court competition, with participants from roughly 700 law schools in 100 countries and jurisdictions. The Competition is a simulation of a fictional dispute between countries before the International Court of Justice, the judicial organ of the United Nations. One team is allowed to participate from every eligible school. Teams prepare oral and written pleadings arguing both the applicant and respondent positions of the case. This year's case covered a wide range of public internaitonal law issues, such as State succession, individual criminal responsibility, parallel proceedings in international tribunals, and the use of artificial intelligence in warfare.