"Ethiopian Yearbook of International Law 2018: In Pursuit of Peace and Prosperity"
28 October 2019 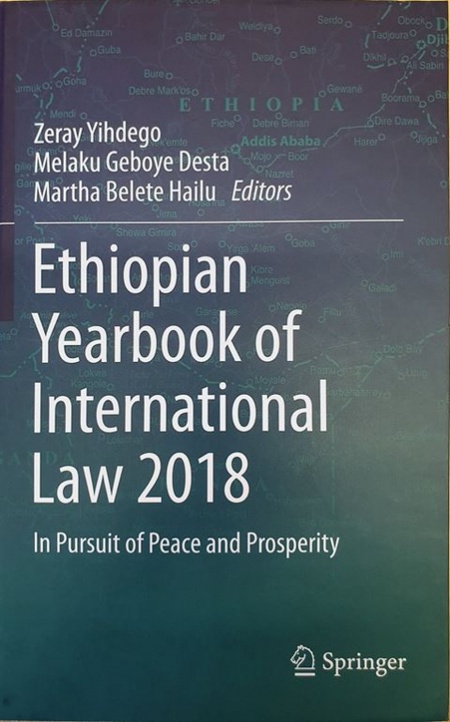 Edited by Professor Zeray Yihdego from the School of Law, the third volume of "Ethiopian Yearbook of International Law 2018: In Pursuit of Peace and Prosperity" has recently been published by Springer.

The book focuses on important accomplishments and challenges in Ethiopia, the Horn and the continent of Africa and covers fundamental principles of international law. With cutting-edge expertise from Africa, Europe, North America and Asia, authors from the School of Law include Professor Yihdego, Professor John Paterson, Dr Contantinos Yiallourides and PhD student Enenu O. Okwori.

EtYIL 2018 comes at a time when multilateralism and its underpinning norms of international law and institutions are under siege. At the same time, in 2018, Africa stood out for upholding multilateralism and international law. From the adoption of the Agreement establishing the African Continental Free Trade Area to the signing of peace agreements that brought to an end two decades of hostilities between Eritrea and Ethiopia, 2018 was indeed a remarkable year for international law in Africa. EtYIL 2018 covers some of these issues, including the Eritrea-Ethiopia Claims Commission decisions on jus ad bellum, jus in bello, evidentiary and procedural matters and the role of arbitration in upholding the international rule of law. Such new developments as the lifting of UN sanctions against Eritrea and the agreements signed between Eritrea and Ethiopia are also covered in this volume. The volume further devotes considerable attention to other legal issues including: the use and misuse of European patent law to the detriment of developing countries’ interests, sharing transboundary resources, production sharing agreements on extractives , evolving rules governing economic relations between Africa and the European Union in the context of Brexit, contract-farming in the African cocoa and chocolate industry, the International Criminal Court and human rights law, and cyber-attacks and the role of international law in tackling them. These chapters, authored by experts from Africa, Asia, Europe and North America not only bring new and diverse voices to the international law discourse; they also contribute to EtYIL’s overarching goal of contributing to the effort to rebalance the narrative of international law.