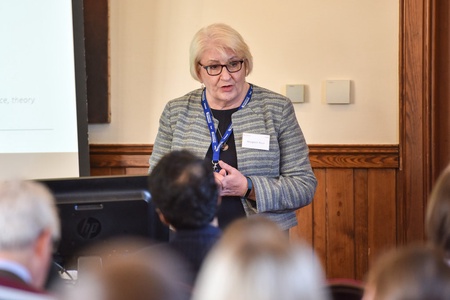 In addition to the conference, Professor Ross will participate in a Symposium on ADR in the Courts, the Legal Educators’ Colloquim and judging the Representation in Mediation competition. Professor Ross will address disputant experience and progress (or lack of it) for ADR in Scotland, linking parties’ perceptions with the user focus of the 2018 independent reports commissioned by the Scottish Government on Regulation of Legal Services and on Rethinking Legal Aid, alongside the Scottish Parliament’s report “I won’t see you in court”.

Professor Ross has a paper entitled: ‘Where parties are outshone and left in the dark as to choice: whither the focus and funding for Dispute Resolution in Scotland?’ at the conference and the abstract is included below.

Where parties are outshone and left in the dark as to choice: whither the focus and funding for Dispute Resolution in Scotland?

In a prize-winning paper presented to this conference in 2004 with Lisa Bingham (now Blomgren Amsler) and others, the author discussed ADR in Scotland alongside experiences from colleagues in the USA, Canada and Australia.  Fifteen years on Scotland has made minimal progress.

The author’s subsequent study of users of a pilot project to offer mediation in two large Scottish civil courts uncovered positives in terms of party choice, settlements that were implemented and protection of credit scores through fewer judgements. It noted the obvious need for more information to be offered to disputants considering litigation since lawyers, once consulted, could be slow to offer information, and education as to choice was limited due to lack of both procedural opportunities and proactive judiciary. It also evidenced the economic efficacy of spending money (whether public or private) on an in-court mediation service as compared to, or alongside, litigation.

Comparative study of countries in e.g. Africa and Eastern Europe shows much greater engagement with mediation as a true option for parties in civil dispute than is the case in Scotland.   International norms of consensual or tailored dispute resolution make the narrow focus of courts and practitioners in Scotland appear self-serving and unworldly.  Those who fear the loss of precedent due to cases being kept out of course do have fuel for their fear, especially when the identity of Scots law as different from Anglo-American common law is held precious. Our neighbours in England and Wales have for decades had practice rules requiring consideration of mediation under pain of costs sanctions, and have now embarked on an ambitious online process.

In reforming Scottish Civil Courts in 2014 after a lengthy review, little focus was given to ADR.  Simplified court procedure (for claims below £5,000) now requires the judge to consider alternatives before allowing the parties to go to trial, but there are virtually no court annexed services to take a reference, and the one consistent service operating in Edinburgh relies on volunteers.  The incidence of civil cases going to trial continues to reduce, while restructured judicial roles, and closure of courts, keeps the resources focus on supplying criminal justice rather than civil.

However there might be evidence of the light for disputants being seen by the establishment in Scotland? In 2018, the Justice Committee of the Parliament of Scotland, makes some positive sounds in a report “I won’t see you in Court”.  A strengthened professional practice guidance statement enjoins lawyers to advise clients on options for resolution of disputes, and to be sufficiently informed to do so.  A review of the regulation of the legal profession now proposes a single regulator, with support for lawyers to work alongside mediators and others in multi-option firms.  A review of legal aid take a firm user focus, and promotes a spectrum of choice.

Scottish Government remains tight lipped on reform and resourcing, despite historically showing great interest in the Maryland model.  How can they be persuaded to take more than baby steps and look towards the light that emanates from parties in mediated dispute resolution?  How, and when, will the planets be aligned to provide light, focus and funding for mediation in Scotland?  This paper explores the conundrum, some of which is attributable to timing and politics, and debates some possible solutions while trying to avoid desperation!