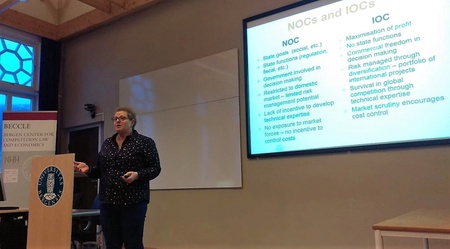 Professor Soliman Hunter presented a paper at the international conference: ‘Developments in the Energy Markets: A multidisciplinary perspective’ hosted by The Bergen Centre for Competition Law & Economics. The conference took place on the 14-15th Janaury at the University of Bergen.

The study commences with a study of Equinor, the recently renamed Norwegian NOC, analysing its metamorphosis from a ‘babe in the woods’ to international energy company operating as a fully commercial enterprise encompassing all forms of energy. The phases in the development of this Norwegian NOC are examined, and the impetus for change. In particular, this example examines the relationship between the NOC and the state, and the gradual shift from tight state instrument to arms-length commercial company with an impact on international energy through its activities.

The second NOC examined in this study is the Mexican NOC Pemex. Until recently, the role of Pemex was unchallenged and unrivalled – the Mexican constitution guaranteed that only Mexican companies could exploit Mexican petroleum resources. Constitutional, and legislative changes in 2013-14 have removed the monopolistic position of Pemex, forcing it to compete alongside international oil companies. Given the drastic drop in production from Mexico in the last 10 years, and interdependence of the USA and Mexico in relation to oil and gas, this shift has the potential to influence international energy markets in the future.

The final case study focuses on Saudi Aramco, which sought to partially privatize in 2018. The delay to its IPO focused a spotlight on both the operations of and the politics behind the worlds wealthiest oil company. This examination focuses on the impact of the privatization of Saudi Aramco on the international energy market, focusing on the impact on the strength of OPEC and the impact on global oil prices.

Further information about the conference can be found here.