Dr. Andrew Simpson advises on draft bill at Holyrood on the Law of Prescription
20 April 2018 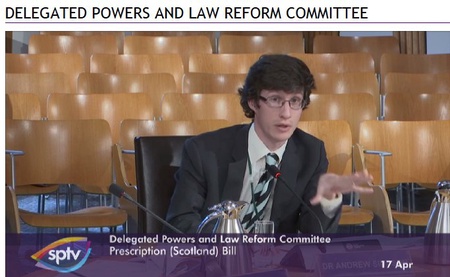 Dr. Andrew Simpson was recently involved in a Delegated Powers and Law Reform Committee meeting at Holyrood discussing the Scottish Law Commission's suggested revisions to the statutory regime of 1973 governing the law of Prescription.

Dr. Simpson and Malcolm Combe  provided expert advice to MSPs  at a Scottish Parliamentary Committee reviewing the Law of Prescription. The Law School academics provided a response to a Call for Evidence, and were invited to attend a committee meeting at Holyrood on 17th April.  Dr. Simpson attended.

The debate was based on the SLC's recommendations concerning amendments  to the 1973 legislation on prescription . The discussion focussed on the extinction of rights over time, and establishing when time periods for calculating the extinction of rights should start, together with what is deemed an appropriate way to establish someone has knowledge of loss. This discussion also considered with whom the burden of proof should lie in cases where someone argues a right has been extinguished

This is the first stage in drafting a bill to change the above legislation.

You can read the Parliamentary report here