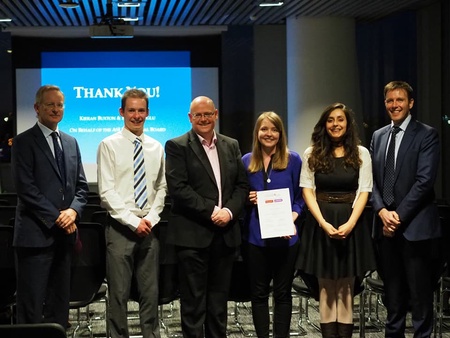 Volume 8 of the Aberdeen Student Law Review was officially launched on Tuesday 20th March. The Stronachs-Dentons prize for best published article was also awarded to Rachael Bain at the event.

The Craig Suite of the Sir Duncan Rice Library was the venue for this year's official launch event.  As in previous years a number of Law-School Staff members and postgraduate students were in attendance.

The event commenced with introductory remarks from this year’s editors-in-chief, Kieran Buxton and Ezgi Ediboglu. Thereafter, two of the authors published in Volume 8 gave presentations based on their articles. First to speak was Rachael Bain, whose article was based on the new jury directions introduced under the Abusive Behaviour and Sexual Harm (Scotland) Act 2016. Second to speak was Katherine Thomson, whose article related to the adequacy of the current corporate governance regulation in the UK's banking sector.

Congratulations are due to Rachael Bain, who was awarded the ‘Stronachs-Dentons Prize’ for ‘Best Article’ by Dr Greg Gordon, Head of the School of Law, on behalf of Stronachs and Dentons. The value of the prize is £200.

The editors-in-chief would like to say a sincere ‘thank you’ to all those who came to show their support at the event; to all authors published in this year’s volume; to the editors for their tireless and meticulous work in reviewing and revising submissions; and to Stronachs LLP and Dentons for their generous and ongoing sponsorship.

Volume 8  of the ASLR can be accessed here