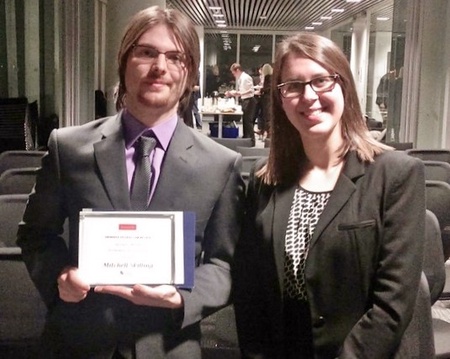 On 13 March 2017, the official Launch Event for Volume 7 of the Aberdeen Student Law Review (ASLR) was held in the Craig Suite of the Sir Duncan Rice Library. A number of Law-School Staff members and postgraduate students were in attendance.

The event commenced with introductory remarks from the Head of School, Anne-Michelle Slater, followed by some brief words of thanks and acknowledgement from this year’s editors-in-chief, Augustinus Mohn and Euan West. Thereafter, two of the authors published in Volume 7 gave presentations based on their articles. First to speak was Mitchell Skilling, a recent graduate of the University of Aberdeen. His paper, entitled ‘The Fifth Element’, examined the role that exclusive possession should play in the Scots law of leases. The second presentation was given by Stephanie Dropuljic, a first year PhD student whose paper, ‘The Classification of Murder and Slaughter’, examined the law of homicide in seventeenth century Scotland. While both authors should be commended for their fascinating presentations, additional congratulations are due to Mitchell Skilling, who was awarded the ‘Stronachs Prize’ for ‘Best Article’ by Laura Bisset, a representative of Stronachs. This year, the prize consisted of a cheque for £200.

The editors-in-chief would like to say a sincere ‘thank you’ to all those who came to show their support at the event; to all authors published in this year’s volume; to the editors for their tireless and meticulous work in reviewing and revising submissions; and to Stronachs LLP for their generous and ongoing sponsorship. Volume 7 of the ASLR can be accessed on the University of Aberdeen website.