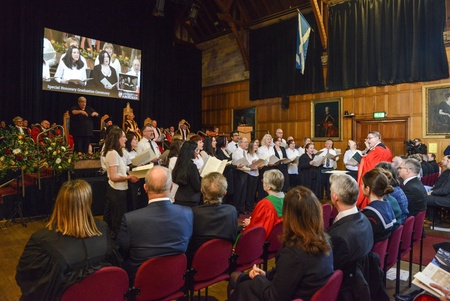 Professor Abbe Brown (Law) and Professor Marcel Jaspars (Chemistry) were awarded an Institutional Strategy Support Fund Award via the Wellcome Trust. This was to support public engagement activity, with a health focus, to sit alongside their contributions (long standing in the case of Marcel) to the negotiation of a new international agreement under UN Convention on the Law of the Sea on marine biodiversity beyond national jurisdiction.  In essence, the agreement is about how to conserve and sustain the vast parts of the oceans which are beyond the control of states, while also enabling scientists to work with marine genetic resources (plankton etc) to make new pharmaceutical drugs.  This could be to the health benefit of many and to financial profit for pharmaceutical companies.  The innovations may also be the subject of intellectual property rights,  giving companies the right to control the use of the innovation, including regarding royalty payments; this could mean that fewer people may be able to benefit  during the period of the intellectual property rights.   Marcel and Abbe have been raising awareness of this range of issues and suggesting workable solutions.

A key public engagement focus had been the writing of a song to celebrate the oceans, which would raise awareness with the wider public of the importance of the negotiations, and hopefully lead to pressure on other publics such as policy makers, country negotiators and pharmaceutical companies through shareholder pressure.   Another goal was preparing videos to assist everyone involved in the negotiation process (directly and indirectly) in understanding more about the oceans and science, and intellectual property rights.

We delivered the Song of the Oceans, the videos and as is explored, many other opportunities also arose. This contribution focusses more, however, on what we have learned about the delivery of public engagement and the challenges and opportunities it raises.

For us, the most important thing was having a good team and institutional and other support.  We received a great deal of support from the PERU team and from colleagues inside and outside the University in making our application and in delivering it.  This was particularly valuable as our plans were interrupted, like so many things, by COVID-19.

Professor Paul Mealor (of course of this University) and his colleague Dr Grahame Davies honoured us by agreeing to write music and words for the song.  Our thoughts about gathering a community choir from across the University gained energy and momentum when this choir was invited to perform at the Special 525 January 2020 graduation before royalty. This gained us the expertise of the Events team and funds to support a pianist and coach for our choir and for a BSL signer.  The prospect of a graduation performance generated an enthusiasm from our volunteer singers which our initial thought of a recording on the beach (in January…) just might not have done. The bravery of our community singers, many of whom had not sung in a choir before was inspiring and generated external attention. We were pleased to be able to honour them (including in their own words) in our website commenting on singing and health. The ISSF funds supported the involvement of ELearning and DigiComs colleagues to build the website, videos and a quiz.

Another theme was resilience and responding to change.  Given the budget and capacity challenges of traveling with a big choir, we played the recording at a sell out public event at the Royal Society of Edinburgh. This was the culmination of a workshop which shared the thoughts of Greenpeace, diplomats and scientists on how most effectively to influence and deliver and new international agreement. To see so many “real” people chose to attend on a dark night, and to have the chance to speak to them about our research, was a privilege.

We had planned several Mayfest events with the choir (with some new members), including the joint launch of the festival and the Public Communication of Science and Technology (PCST) Conference with a live performance at the Music Hall and a discussion with health professionals. Because of the Covid-19 pandemic these plans  turned into a Podfest (without the health professional who was understandably focussed on other things).  An invitation to speak at the Edinburgh Fringe became interactive Zoom (of course) “Tea and Talks” in the Royal Society of Edinburgh Curious programme. A hope to play the recording at the March/April 2020 agreement negotiations could not happen as the negotiations did not take place (although in October 2020 we have worked with a non governmental organisation and an intergovernmental organisation to contribute to virtual intersessional discussions). We continue to work with colleagues in ocean science to see if the song could be performed for World Ocean Week 2021, which raises the question of more translations and (probably) online choirs, and we have been invited to participate in the Techfest.

We have both been involved in public engagement before but the combination of the song and the mystery  of the deep sea to all has led to new possibilities When we interact with negotiators and other advisers, being able to refer to the song, the RSE events and the more practical videos, provide us with a solid basis to suggest that particular approaches should be considered.  The negotiations are alive and the opportunity to contribute to such an important issue is a great incentive. The connections made and public interest raised will provide further opportunities to argue for fairness and sharing of nature and of the ocean.

The path has been long and it continues; it has had its twists and turns; we could not have done it alone; and we would highly recommend that others consider taking their own paths. We would also be really interested in meeting with interesting colleagues (for now, via Teams) to share experiences.