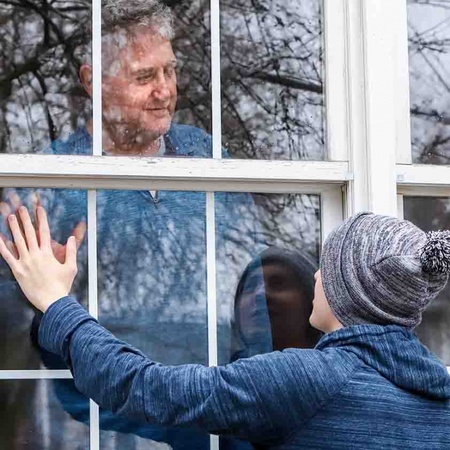 New research by the Health Foundation's Networked Data Lab (NDL) reveals the extent to which the pandemic has had an impact on the more than four million people who were identified as being 'clinically extremely vulnerable' and asked to shield.

This is needed to provide the NHS with an accurate picture of the clinically extremely vulnerable population so that services can be designed and delivered to meet their needs." Dr Jessica Butler, Research Fellow at the University and Analytical Lead for the project in Grampian

Led by the Health Foundation, the Networked Data Lab is comprised of a team of experts from across the UK including the University of Aberdeen and NHS Grampian’s, ‘Aberdeen Centre for Health Data Science’.  The team analysed the impact of shielding on health outcomes across the UK.

The analysis, published in full here, suggests that there are now significant unmet health needs and worsening mental health among this group.

The NDL data also shows that there was a higher rate of deaths in the clinically extremely vulnerable group compared to the general population over the pandemic.

Based on the findings, the Health Foundation is calling for these patients to be prioritised by the NHS to ensure that that their conditions do not deteriorate further.

The report finds that demand for NHS care accumulated during the pandemic and has now translated into record hospital waiting lists and a huge backlog of care.

Based on the findings, the Health Foundation says action is now needed by those planning the pandemic recovery at a local and national level to better understand the needs of their clinically extremely vulnerable populations and ensure that their needs are prioritised.

The research also suggests that there were significant issues in the way that the shielding patient list was compiled. A centralised algorithmic approach was used nationally to identify clinically extremely vulnerable people, supplemented by local clinical judgement.

The authors note that, while this did ensure some level of consistency between regions, there has been significant variation across the UK in terms of the numbers of people who have been added to the shielded patient list. This is due to differences in how the list has been compiled in different areas of the country and the quality of data available.

This, they say this raises questions about how effectively clinically extremely vulnerable people were identified and whether everyone had access to the support they required through the pandemic when they needed it. Those who weren’t identified would have missed out on vital support such as food parcels delivered to homes, priority delivery slots for online grocery shopping, and a medicine delivery service.

“Clinicians in Grampian, across the acute sector and primary care, worked hard to identify those who were at risk and add them to the shielding list. This accounted for almost half of all people asked to shield and took a considerable amount of work.

“While this approach helped rapidly identify some individuals, there are limitations to an algorithm-driven approach. Greater access to data from general practice and better data sharing would improve identification. Investment in data sharing and data quality monitoring will be essential to improving the process.

Dr Butler adds: “This is needed to provide the NHS with an accurate picture of the clinically extremely vulnerable population so that services can be designed and delivered to meet their needs. Better data is also needed so that in the event of future emergencies we can more effectively identify those at the highest risk of poor outcomes.”

Kathryn Marszalek, Senior Analytical Manager at the Health Foundation, adds: “Those who are clinically extremely vulnerable are, by definition, a high-risk group and the government took rapid steps to ensure that they would be protected during the pandemic. Despite this, they have seen worse rates of infection and death from Covid-19 and, having greater health care needs, have been particularly impacted by changes to NHS services during the pandemic.

“However, the negative impact goes beyond the harm to their physical health. Over a period of 10 months, those advised to isolate at home have been unable to take part in usual activities, such as shopping for food, exercising, or seeing friends and family.

“Our research reveals the toll this has taken on the mental wellbeing of many clinically extremely vulnerable people who were already more likely to suffer from mental health conditions than the general population.

“Action is now needed by those planning the recovery at local and national levels to address the unmet need for NHS care and worsening mental health.

“Further investment is urgently needed to ensure that in the event of a future health emergency, we can quickly, accurately and consistently identify individuals to enable rapid planning and delivery of relevant support.”