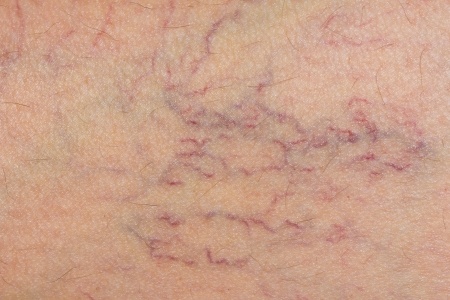 A study led by researchers from the University of Aberdeen which compared different treatments for varicose veins has found that laser treatment is the preferred treatment.

this study has shown us is that overall, for patients who are suitable for all three treatment options, laser is the preferred treatment." Professor Julie Brittenden

Around 30 to 40% of adults in the UK suffer from varicose veins, which are swollen enlarged and tortuous veins. They are caused by valves in the vein becoming leaky which results in increased pressure in the veins. People with varicose veins may have symptoms of discomfort and aching and may go on to get swelling of the ankles, skin changes and sometimes ulcers. The presence of varicose veins may result in reduced quality of life which is improved by treating the varicose veins.

The study, which was published in the New England Journal of Medicine today (Thursday 25 September), was led by the Centre for Healthcare Randomised Trials and Health Service Research Unit at the University of Aberdeen and was funded by the National Institute for Health Research Health Technology Assessment Programme.

Researchers compared three different methods of treating varicose veins. These were surgery which involves removing the veins by stripping them out, laser treatment which uses heat energy of the laser to close the vein, and foam injection, which causes a chemical reaction that makes the walls of the vein stick together.

The study, which involved 798 people requiring treatment for varicose veins, compared the three treatments and looked at how well they worked from both the patient and clinician’s perspective. Participants were randomly selected for the different treatments at 11 vascular surgery centres in the UK , which included Aberdeen Royal Infirmary.

The study concluded that there were moderate differences in quality of life in favour of patients undergoing surgery or laser treatment in comparison to those who underwent foam treatment.

The research also showed that while all three treatments reduced the symptoms associated with varicose veins, fewer complications occurred during laser treatment than foam injection or surgery.

The researchers also found that the foam treatment was less likely to close the leaky vein and therefore there may be  an increased chance of needing more treatment in the future.

Chief investigator, Professor Julie Brittenden, Chair of Vascular Surgery at the University of Aberdeen said: “What this study has shown us is that overall, for patients who are suitable for all three treatment options, laser is the preferred treatment. We have reached this conclusion based on the success and cost of the treatment after six months, however we will follow the participants progress for a further five years in order to determine the longer terms consequences, for example recurrent varicose veins, of each of the three treatments.”