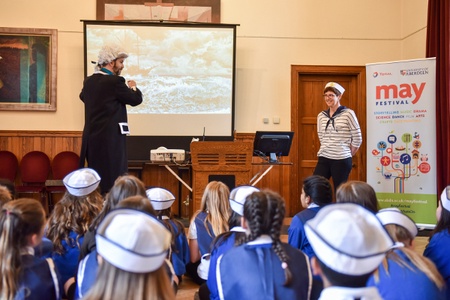 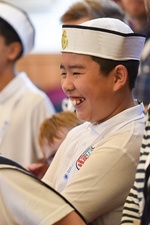 On the 22nd and 23rd of May at the University's May Festival we put on an activity called "A Trial at Sea! How to find out which medicines work best". In it we re-enacted James Lind's first clinical trial with classes of local schoolchildren.

We welcomed nearly 100 children aged between 8 and 11 as well as their teachers and assisting parents.  We took them all back to the 18th-century and onto our Royal Navy ship HMS HSRU, where Dr James Lind, the ship's doctor, played by Gordon Fernie or Katie Banister, and the ship's crew of sailors, played by HSRU staff, welcomed the pupils into the crew for a voyage to the Americas.

There was dressing up in a sailor's attire, learning the ropes via a game, singing shanties about scurvy and acting the symptoms of this scurrilous disease.

The children were randomised to receive one of three treatments for scurvy that James Lind deployed in his original trial – seawater, vinegar or oranges. Fortunately for our new crew the treatments were as imaginary as the ship so they did not need to swallow anything other than the scenario.

We finished with an interactive question and answer session to check pupil’s understanding, give some modern day clinical trial examples and give them the chance to ask questions. We sent our shipmates home with plenty of vitamin C (in the form of an orange) as well as some food for thought in the form of a wordsearch, quiz and an opportunity for them to reflect on their voyage of discovery.

We did all this in an attempt to demystify clinical trials, explain why they are important and a public good, as well as to engage with our local community about what our award-winning health services research is all about.

To view a video of the event please click here.