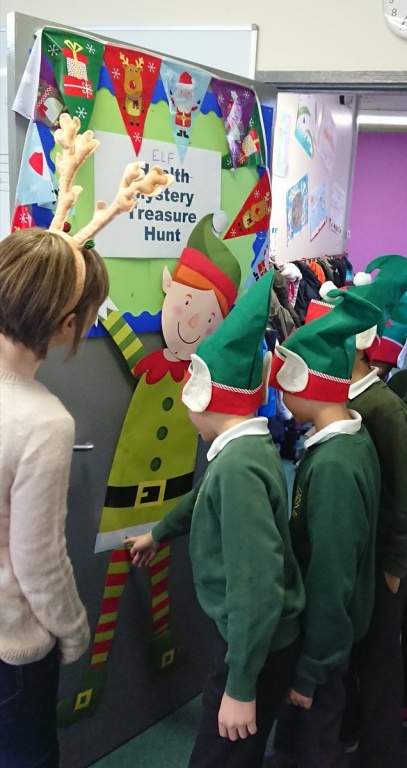 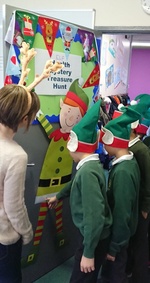 Following our successful events at this year’s TechFest and Maths Week, members of our Public Engagement Group were delighted to bring a Christmas version of our treasure hunt activity to Milltimber Primary School on the 11th of December.

The treasure hunt encouraged the Primary 5 children to think critically about research using two recognisable characters: Sherlock Holmes and Santa Claus. The class had to find several clues to solve the Christmas mystery: does listening to Christmas music make Santa’s elves wrap presents faster than elves who don’t listen to music? The clues were designed to map onto the stages of conducting a systematic review, such as defining a research question, finding relevant data, assessing its quality and combining it to find an answer. By following the information on the clues, the children were able to identify good quality and poor quality research studies. At the end of the activity, the children were also able to recognise that comparing multiple sources of information is useful to give fuller comprehension and understanding of evidence for different topics.

Having solved the mystery, the children were then rewarded with prizes for ‘thinking like Sherlock’ and becoming ‘evidence detectives’. The activity involved simple mathematics with the goal of helping pupils to develop their critical and logical thinking in an age-appropriate and entertaining way. Rebecca Donaldson, primary school teacher at Milltimber Primary School, said “'P5 all enjoyed the Christmas workshop and they really liked learning about different aspects which would lead to a good quality study”.

Magaly Aceves Martins, Beatriz Goulão and Clare Robertson co-led the activity, which was supported by the STEM network in Aberdeen and the Ask for Evidence campaign, part of the Sense about Science charity. It was funded by the University’s Public Engagement with Research Unit’s Enabling Fund.
And the answer to the mystery is that there is good evidence to suggest that elves are faster at wrapping presents if they listen to Christmas music. Let’s hope Santa hears this news before Christmas Eve.