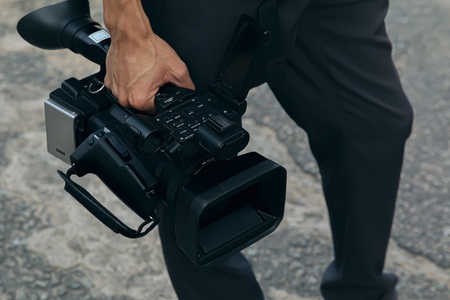 Jennie Riley explores a range of experiences of – and opinions towards – funeral livestreaming, and considers some of the questions this burgeoning phenomenon might require us to ask.

Videoing weddings has been big business for some time. Livestreaming is less common, but not unheard of. In 2016 I went to a beautiful wedding which was livestreamed to Russia so the bride’s family could participate without having to travel. And, of course, many couples will have made good use of the option during the pandemic. Not everyone loves the prospect or feels that it’s a satisfactory substitute for attending a wedding in person. But perhaps the pandemic-induced shift to experiencing weddings via the web was relatively smooth since wedding videography was already relatively well-worn territory.

Until recently, the same wasn’t true of funerals. Some UK crematoria were offering streaming services prior to the pandemic, but this remained an uncommon option and, even then, a minority choice. As Douglas Davies wrote in his 2015 Mors Britannica:

‘It is now increasingly the case […] that modern British crematoria offer the possibility of having the cremation service streamed online to relatives or others not able to be present in the crematorium itself. This suggests an interesting development of ritual participation at a distance.’

The sudden boom in funeral videoing certainly represents an ‘interesting’ and somewhat contentious by-product of pandemic restrictions. It evokes a range of assessments and attitudes, and provokes plenty of questions, some of which this piece explores below.

The livestreaming of funerals epitomizes the adage that necessity is the mother of invention. As social distancing and restrictions on gatherings were introduced in early 2020, funeral livestreams, webcasts and recordings will, to many, have seemed a relatively obvious step, not least against a broader pandemic backdrop of ‘Zoom school’ and ‘Teams meetings’. Many recognize that being able to bring funerals to people’s living rooms may well prove advantageous beyond the Covid-19 pandemic, for those less able to travel, living some distance away, or even keen to reduce their carbon footprint. A phenomenon some previously considered tacky, incongruous or even unnecessary has had the opportunity to demonstrate its affordances and advantages in the last 18 months. For many, streaming has allowed people to ‘feel part’ of funerals they could not or did not want to attend physically during lockdowns.

Quite what ‘feeling part’ of a streamed funeral feels like, though, varies. Some have found online funerals moving and poignant, but not all have found them unambiguously positive. Words such as ‘surreal,’ ‘weird’ and ‘voyeuristic’ have begun to emerge from our project interviews, alongside some more clearly negative descriptions, such as ‘grim,’ ‘cold’ and ‘poor substitute.’ Many may continue to consider filming a funeral ‘intrusive,’ or believe that a screen is simply not a medium through which one can properly experience such rituals. Online funerals thus raise related and intriguing questions about the difference between participating and being present, and whether virtual attendance is a substitute - adequate or otherwise - for being there in person. In both cases, the answer seems to vary from individual to individual, and might be shaped by the approach taken : those speaking may do more or less to include and connect with those watching via livestream, for example; and carefully edited videos, filmed with an eye to sensitivity, might well come across differently to smartphone recordings, or shots by static cameras which primarily capture the backs of mourners’ heads.

If a funeral can be livestreamed, it can almost certainly be recorded and potentially passed on, either via a streaming service, or using hardware such as CDs and USB drives. This raises the inevitable question of what one does with it next. Some may well want any recordings deleted swiftly after the service. This may be because they have no interest in revisiting it, concerned about how it might hinder their grieving process, or deeming the option ‘morbid.’ Others may have concerns about it remaining on the internet in perpetuity.

But some may wish to keep a copy. They may wish to share it with those who could not be there or watch the funeral live – including in cases where livestreaming isn’t readily available. While re-watching a funeral will seem morbid, eerie and unhelpful to some, for others it may provide a useful ‘best option in the circumstances’ and perhaps provide some comfort. It may also provide the opportunity to view a service through different eyes. This was Katharine and Sam’s experience of their wedding recording – they particularly loved the chance to notice details they had missed at the time. The experience of re-watching a funeral is not one in which everyone is keen to partake, but our project interviews to date indicate there are some finding it beneficial and worthwhile.

One of the reasons it was no huge loss when Katharine’s livestream failed was that I had seen her six days previously. I had passed on my good wishes, and thanks to social media quickly got to see the beautiful photos. I will also, hopefully, get the chance to see her again in the not-too-distant future. But when a funeral livestream fails, it feels cruel – for some, it will feel like being robbed of their only opportunity to say goodbye to a person they may well not have seen for some time. That cruelty is heightened in a context where it was already seen as second best to really being there , or a necessity born of pandemic restrictions. When a livestream has become the only option, it feels all the more consequential to be let down by technology – or by human error, as in this scenario.

If we come to use livestreaming by choice, as well as necessity, post-pandemic, it will be important to consider the steps needed to ensure not only effective, reliable access to the necessary technology, but equitable access: alongside concerns about digital literacy and digital isolation, cost will also be a factor here. I enjoyed this story of a wedding videographer who swapped to filming funerals during the pandemic. But can – or should? - a professional videographer justifiably or fairly charge the same fee for a wedding as they might for a funeral where half the family lives on the other side of the world, and has no other means of attending? What if it becomes a widespread choice, rather than a necessity? In the days immediately before the UK’s first lockdown, some funeral firms were quick to waive the costs associated with moving funerals into the digital realm. But people will likely differ in their estimations of whether such a decision is wise, viable or fair beyond an emergency context.

If funeral streaming is here to stay – perhaps on a lesser scale than during the pandemic, but a greater scale than before it – then all of the above opinions and questions, and more, remain with it. Is rewatching a funeral helpful, or haunting? Is it possible to ‘participate’ in a funeral online, or will it only ever be a poor substitute for being fully and physically present? How can we improve the technology and quality in such a way as to make it as fair as possible? These are considerations, experiences and opinions which will require careful consideration as restrictions on funerals are lifted, and the ongoing role of streaming is evaluated. Streaming is just one of many ways in which the pandemic has re-shaped funerals in the UK, and brings with it the need to ask new questions – and discover myriad, subjective answers - about what makes a ‘good’ funeral.