University remembers one of its greatest athletes
17 March 2014 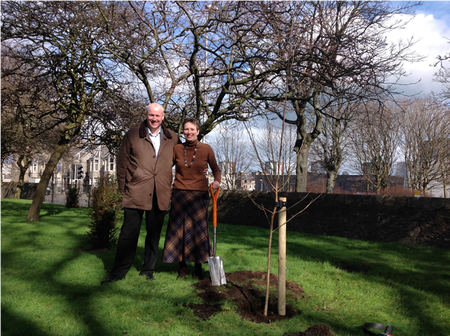 A tree has been planted by the daughter of Quita Barber who was the country's first woman doctor to compete in the Olympics.

A tree was planted at the edge of King's College playing fields today in memory of one of the University's greatest athletes.

Quita Barber, nee Shivas, began her athletics career at the University of Aberdeen, where she proved her prowess nationally and internationally in the late 1940s and early 1950s before competing in the 1952 Helsinki Olympics.

Quita grew up in Aberdeen where she attended the Aberdeen High School for Girls and began to show signs of her athletic ability.  But it was while studying for a MB ChB at the University that her talent came to the fore.  As a sprinter and hurdler she emerged as an outstanding natural athlete as well as a talented hockey player and golfer.

As an active member of the University's Athletics Association, she served as Vice-president in 1949-50 and was also a member of the Scottish University Athletic Union for several years, serving as its women's captain in 1949. During her time at University she won numerous international accolades, taking a silver at the 1947 Paris World Student Games and topping her student athletic career with a gold medal at the World Student Games in Luxembourg in 1951.

After graduating she received the ultimate sporting honour by being asked to represent Great Britain at the Helsinki Olympics in 1952 where she only just missed out on a place in the final, coming third in her heat.

Following the Olympics, she retired from athletics and concentrated on a successful career in medicine and bringing up her daughter Judith with husband Stuart Barber, settling in Melrose.

Quita died in March 2013 and almost exactly a year to the day, her daughter Judith, also an Aberdeen graduate, planted a tree, right beside the playing fields where she trained, recognising the significant contribution she made to the University's athletics history. Also, with a generous donation to the University, Judith has established the 'Quita Shivas Sports Scholarship' which will be awarded to a student who must be an aspiring athlete from track and field and studying any undergraduate degree at Aberdeen.

It is hoped that this scholarship will inspire the recipient to reach their full potential in athletics and maybe one day, also represent their country at the world's ultimate sporting event.