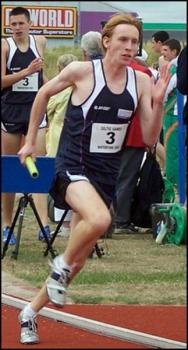 A Silver City sprint star with ambitions to run in the Commonwealth Games has crowned a successful athletics season by landing a prestigious scholarship.

Ian Garioch, who is in the second year of a Geology and Petroleum Geology degree at the University of Aberdeen, has been awarded The John Robertson Sports Scholarship.

The award, which is worth £3,000 a year, comes on the back of a fine performance at the recent Scottish Universities Indoor Freshers' Match where Garioch took both the 60m and 200m title.

Earlier this year, the Elgin runner became Scottish National Champion at Under 20 level when he won 400m gold in a new personal best time of 48.53 seconds.

He also represented Scotland several times throughout the season, including being called up to the senior squad to compete in the 4x400 at the Loughborough International.

Garioch, who is aiming to make the 2010 Commonwealth Games in India and Glasgow in 2014, said: "Attending as many top-class events as possible is key to reaching my goals but in the past financial costs has forced me to miss a number of events on the athletics calendar.

"So I'm delighted to now have the support given to me by the John Robertson Sports Scholarship as it's exactly what I need to compete with the very best young athletes in the sport and to challenge for further honours nationally and internationally."

Garioch, who is now ranked Scotland's top U-20 400m runner, added: "This season has definitely given me the confidence to believe that I could be selected for one of the six Commonwealth Games relay places on offer and hopefully also gain a place in the individual 400m."

David Beattie, Director of Sports Development at the University of Aberdeen said: "Ian is real prospect and one of a number of athletes being nurtured at the University who benefit from invaluable bursaries, of which the John Robertson scholarship is the latest example.

"Combined with the opening of Aberdeen Sports Village in summer 2009, which will be a huge benefit to a whole range of athletes, we are in a great position to give potential stars like Ian the best possible chance to achieve their sporting ambitions."

For more information on the John Robertson Sports Scholarship go to http://www.abdn.ac.uk/sportandrec/performance/scholarship.php