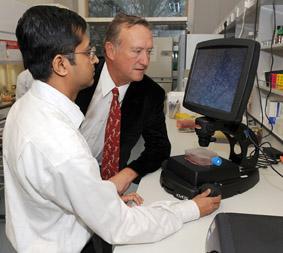 World leading bone research at the University of Aberdeen has received a major boost thanks to the backing of a North-east businessman.

Now Mr Simcox - who has also given thousands of pounds to researchers elsewhere who are investigating a progressive disease called Fibrodysplasia ossificans progressive (FOP) which turns muscle into bone - has agreed to fund a second Roemex Scholarship.

Professor Mike Rogers, Leader of the Research Programme, which is studying common bone and joint conditions, said: “The University of Aberdeen is extremely grateful to Richard Simcox and Roemex for making such a major contribution towards our fight against bone disease.

“It’s tremendous that a business based in Aberdeen, which is already supporting bone research in Oxford and Philadephia, has also agreed to invest so heavily in work taking place right here on its doorstep.

“The University’s Bone and Musculoskeletal Research Programme is the biggest group of its kind in the UK involved in world leading research into diseases and conditions such as arthritis, osteoporosis and back pain.

“The first Roemex Scholarship allowed us to recruit a high calibre PhD student who has been helping further our understanding of skeletal health and disease.

“The second Roemex Scholarship will allow us to further expand our research team by taking on another top quality PhD student who will help with our investigations into back pain.”

Mr Simcox began supporting FOP research in Oxford and Philadelphia after learning of two children in the North-east with the disease.

The businessman, who is also president of the support group Action FOP UK, said:  “I am pleased to be in a position to support medical research in Aberdeen as well as at Philadelphia and Oxford.

“Here at the University of Aberdeen’s Institute of Medical Sciences we have an excellent research facility and  it is great to be involved with the very worthwhile projects Professor Mike Rogers and his team are working on.  When progress is made there is a wonderful ‘feel good’ factor for everyone.”

Subhajit Das is the University’s first Roemex funded student and he has been investigating an enzyme called Mevalonate kinase, which plays a crucial role in the production of cholesterol.

Deficiency of this enzyme results in a rare hereditary disorder which has no cure. Knowing more about this enzyme will help in the development of new treatments, as well as give a better understanding of how it affects cell function.

The second Roemex funded student will focus on back pain, one of the biggest causes of pain and days lost from work. The study will explore how the shape of our spine may make some of us more prone to back pain.