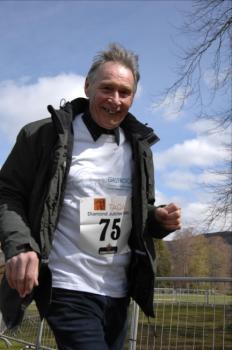 An Inverurie family is hoping that members of the public will get into the swing of things and help them to raise money at a charity ceilidh this week (Friday, April 12).


Lisa Barclay along with her parents, Raymond and Eileen Mitchell and sister Leanne, is hosting an evening of music and fun in order to raise funds for GASTROCAN, (Grampian Gastro-oesophageal Cancer Research Fund), which supports research to improve treatment for oesophageal and gastric cancer at the University of Aberdeen Medical School.

The family decided to put on the event as part of Raymond’s fundraising mission which he embarked on last year.

The former postman was diagnosed with oesophageal cancer a day before his birthday in April 2011 and following a period of intense chemotherapy and an operation to remove his gullet, decided he wanted to fundraise for further research into improving treatments options for the disease.

As such, the family will host ‘Raymond’s Charity Shindig’ at Inverurie Town Hall on Friday, April 12, and are hoping the local community will put on their dancing shoes and join in the fun.

Tickets for the event are priced at £15 and are available from The Black Bull Inn and Booth for Better Service, Inverurie.

There will also be a raffle on the night, with a signed football top from Sheffield United’s Barry Robson up for grabs.

Lisa hopes that the event will not only raise vital funds for the charity, but also awareness of the work it carries out.

She said: “Following his diagnosis and treatment, Dad has been determined to raise as much money for GASTROCAN as possible, and was able to hand over a cheque to the charity for £900 last year after completing the TAQA ‘Diamond Jubilee Mile’ in April as part of the annual Run Balmoral.

“After going through such an intense period of treatment to achieve what he has is a real inspiration to the whole family and so we decided that our next fundraising event should be a good old fashioned shindig and hopefully everyone who comes along with have great fun as well as helping us to raise as much as possible for GASTROCAN.

”We also really wanted to help raise awareness of oesophageal cancer as it is such a serious form of the disease, yet many people aren’t aware of it or its symptoms.”

Dr Russell Petty, a consultant medical oncologist at NHS Grampian and clinical senior lecturer at the University of Aberdeen, added: “I am so grateful to Raymond and his family for all their fundraising efforts to date on behalf of GASTROCAN.

“All the funds that the family raise will provide vital assistance for our research programme of clinical trials and laboratory research to develop better treatments for gastro-oesophageal cancer. Through this research, we are helping patients in the north east gain access to the best possible treatments as well as aiming to develop the more effective treatments of the future.”

Fundraising income for GASTROCAN is channelled through the University of Aberdeen’s Development Trust which is an independent registered charity.  The Trust raises essential funds to support much of the University’s activities such as vital medical research as well as supporting students through the provision of scholarships, bursaries and facilities.  Funding from alumni, individuals, companies, organisations and the community is essential for the development of the medical research undertaken by GASTROCAN and many other activities.