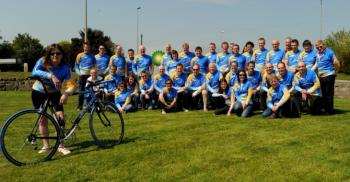 Vasculitis researchers at the University of Aberdeen are to benefit from £41,000 raised by the annual BP cycle challenge.

A team of over 40 BP employees undertook a gruelling three-day cycle challenge in May to raise funds for vasculitis research at the University of Aberdeen and two other charities.  The team raised the magnificent sum of £123,000, including BP matched giving and Gift Aid, to share equally between the three charities.

Cycling from Largs to Aberdeen, through Glasgow and via an indirect, hilly route, the team had to endure one of the hottest weekends this year after having trained in snow, rain, hail and sleet in the previous three months.  Despite this, every member managed to complete the challenge to be welcomed back to Aberdeen by friends and family who were waiting with drinks and a BBQ.

The income from this year’s event takes the four-year grand total to £439,000 with a number of charities benefiting from BP’s generosity and the hard work of the team members taking part.  Jon Turnbull, veteran of the Coast to Coast cycle rides said “Despite the straightened times we’re living in we have broken the previous record for funds raised by £500 with a massive £123,000, so each charity will receive £41,000.  This is a great testament to the generosity of our sponsors, BP’s matched giving programme and of the course the fundraising efforts of all 45 cyclists.  Well done all – brilliant achievement!”

A representative from the University stated “Vasculitis can be a devastating disease if gone undetected and is one that is not widely known about.  We are undertaking vital research at the University of Aberdeen to find out more about this disease and to seek cures and develop treatments for those affected.  This size of donation is very much appreciated and we would like to sincerely thank everybody that took part as well as BP for matching the fundraising efforts.”

Fundraising income for vasculitis research is channelled through the University of Aberdeen Development Trust which is a registered charity.  The Trust raises essential funds to support much of the University’s activities such as vital medical research as well as supporting students through the provision of scholarships, bursaries and facilities.  Funding from alumni, individuals, companies, organisations and the community is essential for the development of vasculitis research in Aberdeen as well as many other activities.