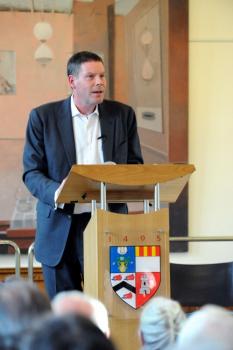 A lecture given by Hector Sants in memory of his grandfather William Watt Hepburn has launched an annual series of events.

The inaugural Watt Hepburn Lecture was given by Hector Sants on Thursday 3rd May in memory of his grandfather, William Watt Hepburn.  The lecture, which focussed on the interaction between regulation of corporate governance and entrepreneurship, launched an annual series of events which has been created by a generous donation from Mr Sants’ mother Ann Sants, in memory of her father.

William Watt Hepburn was an Aberdeen businessman described as a "business genius".  He was one of the most successful entrepreneurs of his generation with a wide and varied range of business interests including Richards textile mill, Kilgour & Walker the woollen mill, Northern Agricultural & Lime Co and A Hall & Co of which he was Managing Director.  He also owned a chain of restaurants in Glasgow.  Watt Hepburn died in 1953 and the lecture series will serve as a lasting memory of his business acumen.

The fully subscribed lecture, which was hosted by the University’s Principal, Professor Ian Diamond, was attended by local business leaders, business postgraduates and undergraduates and members of the public.  It was followed by a lively question and answer session during which Mr Sants gave further insight from his experience in the banking and financial services industry.