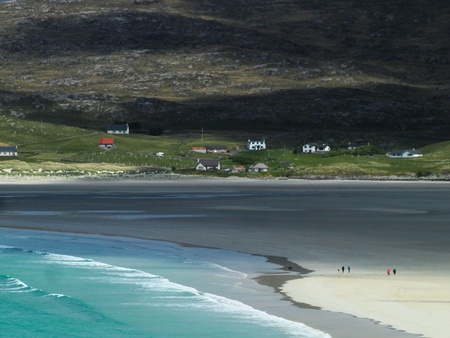 How do islanders maintain connections to their communities when they are living elsewhere? This is one of the questions being asked by University of Aberdeen / James Hutton Institute researcher Kirsten Gow as she explores how those with island connections could play a part in the future of island life, including through return migration.

Kirsten, who is based on the Isle of Jura, is keen to hear from people who have lived on a Scottish island in the past, or who have strong links to a Scottish island but who don’t live on one at the moment. As part of her research she has set up a short survey to learn more about how people stay connected to island life and whether or not they would consider living on an island in the future.

“I know from personal experience that you don’t necessarily stop being part of an island community just because you move away,” explained Kirsten. “I believe that it’s important to pay attention to the strong connections people have with Scottish islands even when they are living elsewhere. It potentially tells us a great deal about island culture and identity, but it also might help us understand how we can make the most of these continued links to build sustainable futures for our islands.”

Kirsten’s research, which is funded by the Macaulay Development Trust, started with looking at strategic objective one of the National Islands Plan - addressing population decline and ensuring a healthy, balanced population profile in Scotland’s islands.

The 2019 plan noted that the global trend for urbanisation has led to long-term depopulation and a shrinking working age populations in many island areas, highlighting that ‘depopulation has an adverse effect on community confidence and service sustainability, increasing the vulnerability of communities already experiencing higher costs of service provision and market access’. In addition, some have pointed to the cultural impact of depopulation, with the loss of Gaelic language and local knowledge threatening unique ways of life in the islands.

Research already tells us that, if we want to make sure our islands have a sustainable future, many of them will need to maintain or increase their populations by encouraging more people to move there." Researcher Kirsten Gow

“Research already tells us that, if we want to make sure our islands have a sustainable future, many of them will need to maintain or increase their populations by encouraging more people to move there,” explained Kirsten.

“But it’s not just about numbers. Return migration – people with connections to an island moving ‘back’ to the island – can potentially help tackle depopulation while also helping us retain the cultural and local knowledge which is a key part of building resilient and sustainable communities.”

In the first stage of her research Kirsten’s survey is designed to help her understand the ongoing connection people have to islands, even while living elsewhere. In later stages she intends to speak to those who are actively interested in moving back to an island, and those who have already made the move, in order to understand the aspirations and realities of return.

Further information on Kirsten’s research and a link to the survey can be found at https://islandsresearcher.uk/take-part/