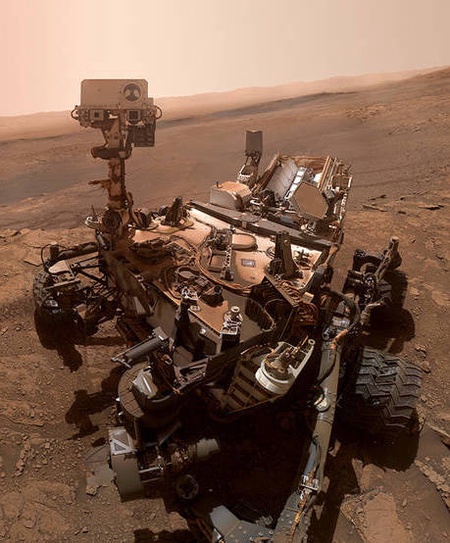 Over the course of nearly six years, the instrument SAM (Sample Analysis of Mars) at
NASA's Mars Science Laboratory Curiosity rover has acquired atmospheric composition
measurements of the air of Gale Crater on Mars.
The results from the study has been published in the Journal of Geophysical Research:
Planets. Two of the authors are GAS-Luleå University of Technology's Professors, Javier
Martin-Torres and Maria-Paz Zorzano, now with the University of Aberdeen.

According to the study, the amount of oxygen added to the Martian atmosphere varied, implying that something was producing it and then taking it away. There is a “significant seasonal and interannual variability, suggesting an unknown atmospheric or surface process at work”.

The atmosphere on Mars is made up of primarily carbon dioxide (95%) but also consists of nitrogen, argon, oxygen and carbon monoxide, between others. During the martian year the barometric pressure is known to cycle up and down substantially as the carbon dioxide freezes out and then is re‐released from polar caps. Nitrogen and argon follow the pressure changes with a delay, and the scientists expected it to be the same with oxygen. Instead, the amount of oxygen rose throughout spring and summer by as much as 30%.

"We do not know what is producing the excess of oxygen in the spring and summertime. Currently, the most likely source of this excess is the Martian soil, but even if this is the case we have no idea what in the soil is releasing so much oxygen into the atmosphere", says Professor Javier-Martin Torres, adding:

"The most fascinating thing to me is that the in-situ observations with Curiosity are showing us that there are some things that we do not know about the photochemistry processes in the atmosphere of Mars. That happened with the observations of the behavior of methane and now with these observations of oxygen."

Interaction of surface and atmosphere

The new data can be used to better understand how the surface and atmosphere interact which is important in the search for signs of habitability on Mars.

"The new data can be used to better understand how the surface and atmosphere interact which is important in the search for signs of habitability on Mars.

"For me this is telling us, one more time, that we need to send more in-situ instruments to the surface of Mars before we send astronauts to the planet. If you send your children to an excursion you want to know very well where they are going. We need to have a very good characterization of the Mars Environment before we send humans to Mars. I would bet for a deployment of many environmental stations on Mars before exploring it."