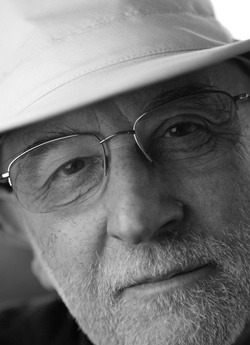 Sir Michael Victor Berry FRS, Melville Wills Professor of Physics (emeritus) at the University of Bristol, is an internationally  renowned scientist for his research in the ‘borderlands’ between classical and quantum theories and ray and wave optics. His emphasis is on geometrical singularities such as ray caustics and wave vortices. He discovered the geometric phase (Berry phase), a phase difference arising from cyclically changing conditions with applications in many areas of wave physics, including polarisation optics and condensed matter.

Professor Berry also delights in finding the arcane in the mundane: mathematical singularities in rainbows and the dancing lines at the bottom of swimming pools; the twists and turns of a belt that underlie the quantum behaviour of identical particles; a laser pointer shone through bathroom window glass to demonstrate abstract aspects of wave interference; and oriental magic mirrors, illustrating the mathematical Laplace operator.

Sir Michael was elected a fellow of the Royal Society of London in 1982 and knighted in 1996. He has received numerous awards, including the Maxwell Medal and the Dirac Medal of the Institute of Physics, the Royal Society’s Royal Medal, the London Mathematical Society’s Pólya Prize, the Wolf Prize and the Lorentz Medal.