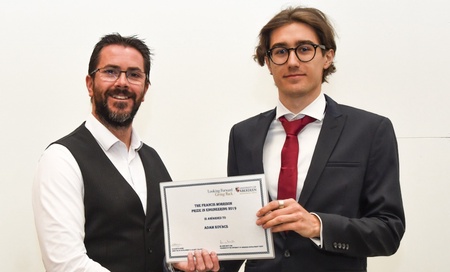 The achievements of engineering students from the University of Aberdeen were recognised at an annual prize-giving ceremony that took place recently.

The annual event, which takes place at the University’s School of Engineering, saw over 20 prizes handed out to undergraduate students who have excelled in their field of study.

Among the prize-winners was Adam Kovacs, who won the Francis Morrison Prize in Engineering - awarded to the most distinguished graduating student.  Adam, who graduated with a first class honours in Mechanical Engineering, also picked up the Institution of Mechanical Engineers Best Project Certificate.

Meanwhile, the Inspiring Future Female Engineers Prize went to Olga Posopkina in recognition of her efforts to encourage girls to take up engineering.  Olga, an Electrical and Electronic Engineering graduate, is a member of the University’s PrototAU team that has designed and built a hydrogen-powered car to take part in this year’s Shell Eco-marathon competition.

Other winners include Kim Beattie who won The Peter McConnell Memorial Prize as the best 3rd Year Electrical and Electronic Engineering student, and Jack Caven, who was awarded the Aberdeen Mechanical Society R.V. Jones Trophy for his honours project which focused on artificial intelligence applications in engineering.

“Our annual prize-giving gives us the opportunity to recognise and celebrate the achievements of those students who have excelled in their studies, and I would like to congratulate all of this year’s winners for their hard work, talent and dedication.

“Many of this year’s winners have recently graduated and I would like to wish them every success in their future careers.”

I would like to congratulate all of this year's winners for their hard work, talent and dedication." Professor Igor Guz, Head of the School of Engineering

The Institution of Engineering and Technology (IET) - Maciej Muszynski