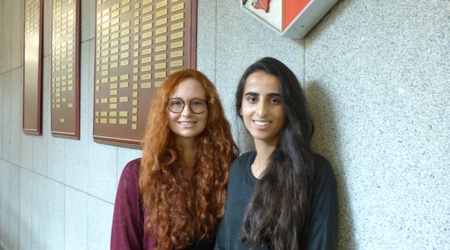 Two chemical engineering students from the University of Aberdeen have been awarded coveted scholarships from the Royal Academy of Engineering.

Lisa Rossi and Aminah Ahmad were awarded scholarships under the Royal Academy’s Engineering Leaders Scholarships programme, which is now in its 22nd year.

This programme aims to provide support for engineering undergraduates in UK universities who have the potential to become leaders in engineering and who are able to act as role models for future engineers.

Lisa and Aminah underwent a rigorous assessment process in order to win their scholarships, which include a cash award to assist in academic and career development. They were encouraged to submit their applications by fellow scholar and former President of the student Engineering Society Allan MacLeod, who received his in 2015.

Explaining the benefits, Lisa said: “Winning this scholarship means that we have been earmarked for our potential as leaders, and as part of that we have been given funds to use for activities that we think will be helpful in our development, for example extra courses, conferences, and work experience.”

Aminah added: “One of the other key benefits is that we now have access to a network of scholars as well as support from the Royal Academy of Engineering, where you can ask for advice from people who are at the top of their game.”

One of the key benefits is that we now have access to a network of scholars as well as support from the Royal Academy of Engineering, where you can ask for advice from people who are at the top of their game" Aminah Ahmad

The pair had their first experience of life as Royal Academy Scholars when they attended their first annual meet-up with fellow scholars from across the UK in Birmingham last weekend, where they had the chance to network with fellows from the academy working in senior management roles.

As active members of a number of engineering societies at the University, the pair are regular participants in networking and discussion events, which they credit with helping their development.  Last weekend’s meet-up gave them the chance to take this experience to the next level, and through the scholarship they are now looking for similar opportunities that can help them develop their skills.

Aminah said: “I’m already planning to go to a number of conferences locally and possibly abroad, using the funds I was awarded by the Society.  Next year I hope to go to LSE and do a summer school course in programming and finance, building on what I have learned at the University already.”

Lisa added: “Ideally I would like to get work experience internationally, and I’m hoping this will help support that. I had an oil and gas internship this summer but I want to do something different next time, so I’m evaluating my options.”