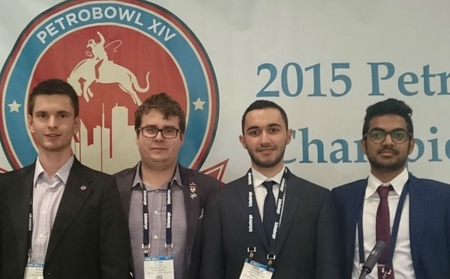 Students from the University of Aberdeen chapter of the Society of Petroleum Engineers (SPE) enjoyed a stateside visit last month when they travelled to Texas to take part in the Society's prestigious Petrobowl competition.

It was the first time that the University’s student chapter had qualified from the regional heats to represent the European region in the global finals, which was held in Houston on September 28th, during the SPE Annual Technical Conference and Exhibition.

Despite losing out in the first round to the winners of the Asia-Pacific region qualifiers, the team were proud to be the first to represent the University in the finals.

Adam Zalewski, who is President of the student chapter, was part of the team of four who travelled to Texas, along with Pavel Farbatiuk,  Jimmy Joseph, and Ismayil Suleymanov.

“It was an eye-opening experience because it gave us the chance to speak to students from other SPE chapters from around the world and get their perspective,” Adam said.  “It was good to learn about the kind of problems they face, how they have solved them, and the circumstances in which they operate.”

Pavel, who like Adam is a final year MENg Petroleum Engineering student and sits on the committee of the SPE student chapter, added:  “The Petrobowl competition is aligned to the SPE Annual Technical Conference and Exhibition which is the annual gathering of petroleum experts worldwide, and one of the biggest events in the society’s calendar.

“So not only was the trip a great chance to network with other students, it also meant that we could meet experts from industry, and attend technical talks and presentations from company representatives.

The trip was extremely valuable for all of us, and we plan to share the lessons we learned with the next generation of students who take part in the Petrobowl competition in future." Pavel Farbatiuk

“The trip was extremely valuable for all of us, and we plan to share the lessons we learned with the next generation of students who take part in the Petrobowl competition in future.”

The trip to Houston had a twin purpose for Adam, as he also picked up the prestigious SPE North Sea Star scholarship from SPE President Nathan Meehan.

Each year the Society awards Star scholarships to the most outstanding students to support them in their studies, and Adam was announced as the recipient of the North Sea Star award earlier this year, becoming the latest in a long line of  University of Aberdeen students to receive the scholarship.

Adam recently received a job offer from BP following an internship with the company, and he describes his involvement in the SPE student chapter as being a major factor in helping to secure a position.

“Historically the University’s SPE student chapter has been very active, and in recent years has twice been branded as the best in the North Sea region,” he explained. “Studying at the University and being involved with SPE has opened up so many learning and development opportunities for me, and I would encourage any new students to make the most of the opportunities here in Aberdeen by getting involved with the chapter.”

Pavel, who has recently completed an internship with ConocoPhillips, added: “The great thing about studying in Aberdeen is that you have industry right on your doorstep, so as well as academic lectures we also benefit from lectures delivered by industry professionals through the University and through SPE which gives you an insight into the practical value of what you are learning.

“Because the oil industry is so global it is not only enough to be technically sound, it is also necessary to be business and management aware, and that is why it is so valuable to learn directly from those who are working in the sector every day.”