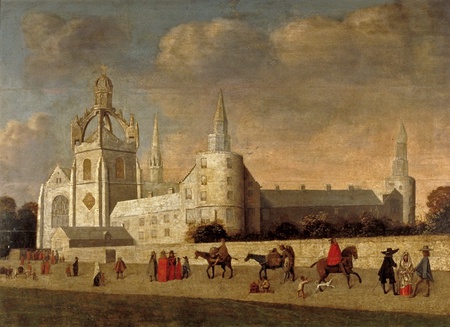 On February 13, the University of Aberdeen will mark its 527th birthday and a new publication exploring some of the key moments and figures which have shaped the institution's history is nearing the final stages of editing.

A New History of the University of Aberdeen will be released in the autumn and is a fresh look at both the University’s earliest beginnings and some of the students, staff and alumni who have shaped it over the centuries.

The book is edited by Professor Michael Brown, Chair in Irish, Scottish & Enlightenment, and Dr Brad Bow, Lecturer in Scottish History and draws on a popular series of podcasts produced to mark the University’s 525th anniversary.

The new history will place a greater emphasis on the international nature of the University and consider the importance of its cultural history with issues of gender, race and power given a more central role than in previous historical accounts.

Professor Brown said: “This is retelling the story of how Aberdeen rose from a small medieval foundation to a significant hub of intellectual life in the region, nationally and indeed globally, bringing Aberdeen out to the world and just as significantly, bringing the world to Aberdeen. The University has since its foundation been open to all, and this new history reflects that commitment.

“In the course of its history the University has experienced external forces from the civil wars of the 1640s, the Union of Crowns of 1707 to the disruption of the Church of Scotland in the nineteenth century and the world wars of the twentieth century. But throughout it has sought to excel in the pursuit of truth, and it has a long record of achievement that we want to recall, even as we look ahead.

“It is a long tradition of academic achievement: the University has contributed to the Reformation, the Enlightenment and has been associated with five Nobel laureates.

“With the passing of the significant milestone of 525 years it seemed an appropriate time to embark on a nuanced history of both the institution and its people.”

Dr Jackson Armstrong, a specialist in the later middle ages, says a more international exploration of the University’s history is in line with its earliest foundation in 1495 – as King’s College before it merged with Marischal College in 1860 to become what is today the University of Aberdeen.

“Many previous accounts represent King's College as a new innovation for the Northeast, connecting a somehow isolated and remote region of the kingdom to the world of learning,” he added. “But while Aberdeen had no more than a few thousand inhabitants, at the end of the 14th century it was counted in Bruges as amongst the four principal towns of Scotland.

“To me, the early history of the University and the context out of which it was created, is about how Bishop Elphinstone’s foundation was as a result of an outward looking, creative and internationally connected Aberdeen. That was a medieval legacy which would continue for centuries to come and which we hope to showcase through this new publication.”

With the passing of the significant milestone of 525 years it seemed an appropriate time to embark on a nuanced history of both the institution and its people." Professor Michael Brown

Professor Karin Friedrich, Chair of Early Modern History agrees saying: “The volume on the 525th anniversary of King’s College highlights the important role that the University of Aberdeen has played since the Renaissance, not only for the North-East of Scotland, but for innovation and exchange between Scotland and Europe.

“For example, Duncan Liddel (1561-1613), who spent 13 years at the University of Helmstedt in Germany as a professor of mathematics and medicine, is an example for this lively transfer of ideas. Liddel brought to Aberdeen the teachings of Copernicus and contributed to the ideas of tolerance characteristic of the city’s motto, bon accord.

She added: “The international and multi-disciplinary nature of his scholarship is reflected in his valuable library that still enriches the University's Collections. It is an ambition of scholarship that the University of Aberdeen is still pursuing today.”

525 Years in the Pursuit of Truth: A New History of the University of Aberdeen revisits some of the best-known figures from the University, including Hector Boece (1465-1536), a Scottish philosopher and historian, and the first Principal of King's College; and philosopher Thomas Reid (1710-96), internationally known as the chief representative of the Scottish School of Common Sense.

These include abolitionist Reverend James Ramsay, an alumnus of King's College. Born in 1733 in Fraserburgh, he went on to become an Anglican minister and a ship's surgeon after completing his studies.

It was at sea that Ramsay first witnessed the realities of colonial slaving, encountering a slave ship on route from Africa to the West Indies on which dysentery had swept away much of the enslaved, crew, and the ship’s surgeon. He then spent 15 years as a preacher and then as a medical attendant to the enslaved population of the island of St. Christopher, today known as St. Kitts

His abolitionist writing sparked a firestorm of controversy but Ramsay’s biographer, the Nigerian historian Fọlarin Shyllon, subtitled his 1977 study of Ramsay as “The Unknown Abolitionist” as for many years his contributions to the debate were largely overlooked.

The book also recovers other characters from the University’s past, such as Mary Esslemont (1891-1984), who was the first woman to serve as chairperson of the British Medical Association, and Sir Herbert J.C. Grierson (1866 – 1960) who is credited with transforming the study of English in the UK.

The podcast series 525 Years in the Pursuit of Truth: A New History of the University of Aberdeen can be listed to at https://www.abdn.ac.uk/events/resources/525-years-in-the-pursuit-of-truth-a-new-history-of-the-university-of-aberdeen-1654.php with the book launch planned for later this year.