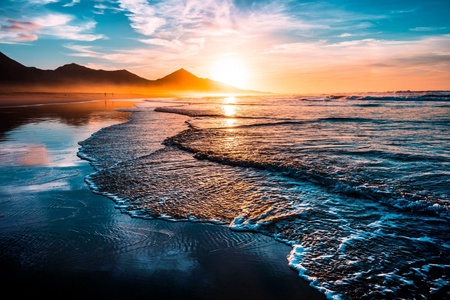 A song which aims to raise awareness of the importance of the ocean and highlight the major issues of declining ocean health, will receive its world premiere tomorrow (Tuesday, 8 June) to mark World Ocean Day 2021.

Created collaboratively by a team from science, law and the arts at the University of Aberdeen, in conjunction with the Deep-Ocean Stewardship Initiative (DOSI), Song of the Ocean – a United Nations Ocean Decade-endorsed activity which features an international virtual choir from around the world – will be unveiled at 2pm BST (1pm UTC)

Looking for ways to increase public engagement and to highlight the major issues of environmental impacts upon our oceans, sustainability and planet protection, they teamed up with renowned composer Professor Paul Mealor, who wrote the music and internationally-acclaimed poet, Dr Grahame Davies, who wrote the words.

A community choir of representatives from across the University first performed Song of the Ocean at a graduation ceremony in 2020, where Her Royal Highness the Princess Royal received an honorary degree, and plans to release it more widely were put on hold with the outbreak of Covid-19.

Professor Jaspars said: “Last year, we discussed Song of the Ocean with DOSI - a global network of more than 2,000 scientists from more than 90 countries which advises governments and international organisations on the sustainable management of the deep ocean - and they were keen to support the project and help us get it out there globally.

“The composition has now been recorded with the Philharmonia Orchestra and a performance by an international virtual choir drawn from the DOSI network and its friends, with choir members singing in English from Europe, Tonga, China, USA, Belize and Mexico and the Singing Hands signing group using British Sign Language.

“The ocean is often ignored as much of it is ‘out of sight, out of mind’ and the vital role it plays in sustaining life on Earth is not appreciated. The words of the song describe the damage done by humans to the ocean and the need for humankind to work together to heal the ocean.

The ocean is often ignored as much of it is 'out of sight, out of mind' and the vital role it plays in sustaining life on Earth is not appreciated. The words of the song describe the damage done by humans to the ocean and the need for humankind to work together to heal the ocean." Professor Marcel Jaspars

“The last year of lockdowns has taught us that connecting at a human level is essential, and singing is an excellent and effective way to do this. Singing and being part of a community can make an important contribution to health, as well as to the future of the ocean by spreading the message globally. We hope that this will inspire school choirs to engage with ocean and climate issues and perform the piece for different audiences around the globe.”

Professor Paul Mealor said: “It’s been a real delight to be involved with this project which brings science, law and art together in a quite unique way. Protecting and helping our oceans should be paramount to all of us and to be part of this is really important to me. I hope this little song and this wonderful collaboration will resonate and help bring the scientific message a little closer to home.”

Alexander Van Ingen, Chief Executive, Philharmonia, added: “The Philharmonia Orchestra is delighted to be a part of World Ocean Day through this collaboration with composer Paul Mealor, lyricist Dr Grahame Davies and the University of Aberdeen.

“The environment is a topic of major discussion in the arts at present, and one close to the Philharmonia’s heart.  Music is moving and inspirational; it takes over where words leave us, and can enhance our perception of the natural world, driving advocacy and fostering empathy. The ocean needs us, and the Philharmonia Orchestra is proud to support the Deep Ocean Stewardship Initiative in this first year of the United Nations’ Ocean Decade.”

Anthony White, Producer of Song of the Ocean and a third-year Music student at the University, said: “It has been a real pleasure to be part of a global team of creative artists, collaborators and scientists for the 2021 ‘Song of the Ocean’ global virtual project.

“It has been a privilege to have been asked by DOSI to produce a short video of ‘Song of the Ocean’ and to work with the world renowned Philharmonia Orchestra. It is remarkable, that even through challenging times, people across the world can sing together and raise awareness about ocean pollution.”

Chris Collins, Head of the University’s School of Language, Literature, Music and Visual Culture, said: “It’s great to see Anthony using his talents to improve public awareness of such an important topic as the future governance of our oceans. Interdisciplinary work to promote environmental sustainability is key to the University of Aberdeen’s strategy over the next 20 years, and I know our students want to be at the forefront of that.”