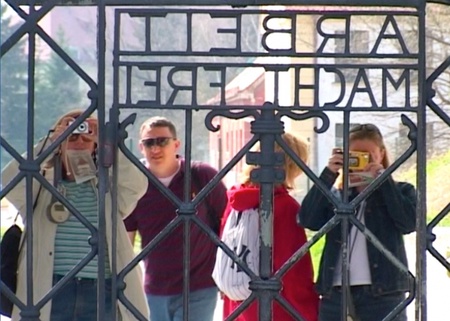 A screening and discussion with filmmaker Alan Marcus

In Place of Death (2008, 30mins)is an experimental film that uses close observation and metaphor to investigate the way people engage with an iconic urban site.  With this year marking the 70th anniversary since the liberation of the camps, the film problematizes the role of the first Nazi state concentration camp, now a post-traumatic site attracting some 800,000 visitors a year, sited in the picturesque Bavarian town of Dachau.  Eschewing archival images or narration, the film focuses firmly on the present as it observes scenes of people coming to the camp for a picnic or posing their children in front of the ovens. A film which studies forms of interactions and the stature and meaning of place, it developed from a video installation, Beautiful Dachau (2006), shown at Harvard, Princeton and Cambridge, and part of the In Time of Place research project (http://www.abdn.ac.uk/timeofplace/).

Prof. Alan Marcus, Chair in Film and Visual Culture at the University of Aberdeen, researches approaches to documentary film and representations of iconic urban environments.  He received his MPhil and PhD at Cambridge University while at the Scott Polar Research Institute, where his fieldwork included research in four Inuit communities in the Canadian Arctic.