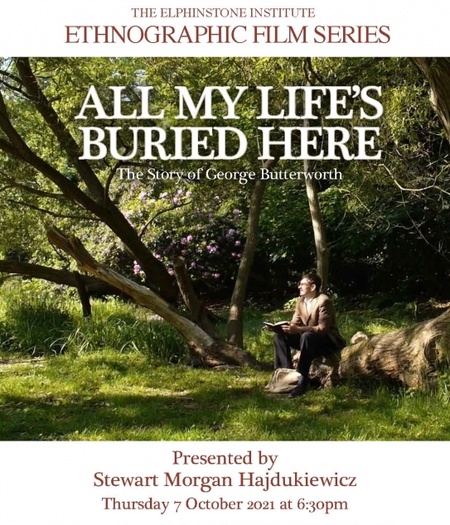 For the first time in a documentary film, the remarkable story of British composer George Butterworth (1885 – 1916), his music, life and times. Drawing on newly uncovered archival treasures, including the letters and memoirs of those who knew him best, ALL MY LIFE’S BURIED HERE is the compelling account of a pioneering British composer, musician, folk song collector and dancer cut down in his prime on the battlefield of the Somme. This film is the result of more than three years spent exploring all known George Butterworth archive collections, interviewing Butterworth's surviving family members and travelling throughout the UK and to northern France to record the testimony of those best able to provide insights into George Butterworth's life. The film includes a close examination of the Edwardian English folk revival and the methods and motivations of early collectors such as Butterworth and his contemporaries Cecil Sharp and Ralph Vaughan Williams, Maud Karpeles and Lucy Broadwood.

The filmmaker aims to redress certain myths about the composer's life and work by presenting Butterworth in the proper context of his times, and uncovers some fascinating new information along the way. A range of outstanding recordings - both of Butterworth's own music and of the traditional folk songs that influenced him – were secured for use in the film and serve to animate and enrich this important story.

All My Life's Buried Here is a film by Stewart Morgan Hajdukiewicz (b. Leicester, 1979). An independent filmmaker responsible for a number of short documentaries under his HajduKino Productions banner, this is the director's first feature-length documentary.