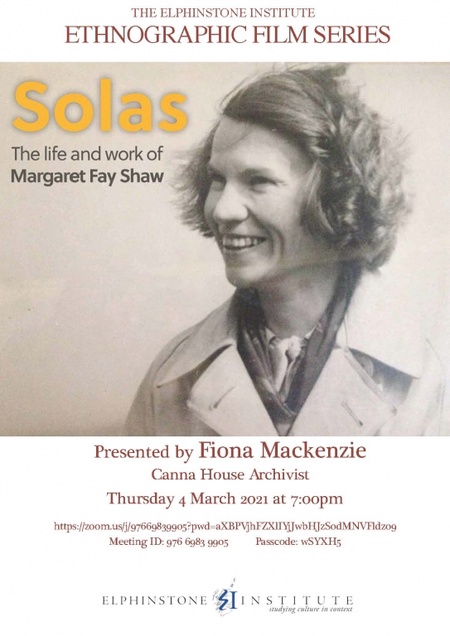 “Solas”, the Gaelic word for ‘Light’ is a new film produced by Canna Archivist for the National Trust for Scotland, Fiona Mackenzie, about the filmwork and images of  folklorist Margaret Fay Shaw in the Hebrides in the 1930s and 40s . Folklorist Margaret Fay Shaw first came to Scotland as an orphaned teenager, from Pennsylvania, in 1920. Her family decided to send her to St Bride’s school in Helensburgh, in an attempt to get Scotland, the home of her forefathers, to  ‘sort out’  this ‘difficult’ teenager. It was in Helensburgh that Margaret first heard Gaelic being sung and she decided there and then to make Gaelic song her ‘life’s quest’, to find the ‘pristine version’.

Margaret spent six years living in the remote hamlet of North Glendale, South Lochboisdale, South Uist, between 1929- 35, collecting songs and taking pictures. She became one of the world’s first female photographers and cinematographers, documenting a disappearing way of Hebridean life. She not only took film and photos in the Outer Hebrides but also on the Isle of Canna, where she lived with her husband, fellow folklorist John Lorne Campbell from 1938 when they bought the island, until her death in 2004.  The film uses Margaret’s images, films and words and those of her close friend Magda Sagarzazu,  to tell the story of her life and the people and animals in that life “Solas” is accompanied by a brand new soundtrack composed by Lewis piper, James Duncan Mackenzie, inspired by Canna House and its collections.