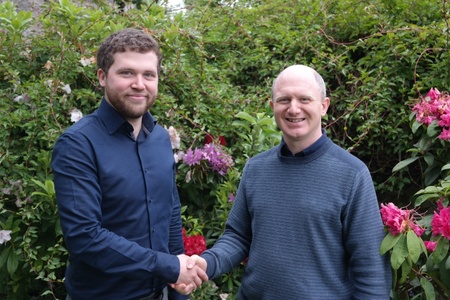 Elena Mayer-Besting and Maria Nilsson were awarded the CELMR Shedden prize for their outstanding dissertations in labour economics. Dr W David McCausland, Head of Economics and Assistant Director of The Centre For European Labour Market Research (CELMR) praised the truly outstanding ability and work ethic of these first-class students.

Elena is going on to postgraduate study in Development Studies in Geneva. During her period of study in Aberdeen she undertook internships at the American consulate in Munich and Childreach International in London, as well as climbing Mt Kilimanjaro and trekking to the Everest base camp for charity.

Maria is joining the Graduate Training Programme at Handelsbanken in Reading in June, following a successful internship last year at Handelsbanken in Kiruna, Northern Sweden. She was the founder of the Society "Stop the Traffik" which won the AUSA best event award in 2015.

Yaru Tan and Conor Mclachlan-Sayer were recognised as the highest achieving senior honours students in Economics. Yaru currently has her sights on postgraduate study in Finance. She has been actively engaged with the Confucius Institute, delivering lectures in Chinese Characteristics and supplying learning support in Chinese. Conor is taking up a four-year tax specialist graduate programme with HM Revenue and Customs in Edinburgh this September. During his studies in Aberdeen he was VP of the Aberdeen Fabian Society.