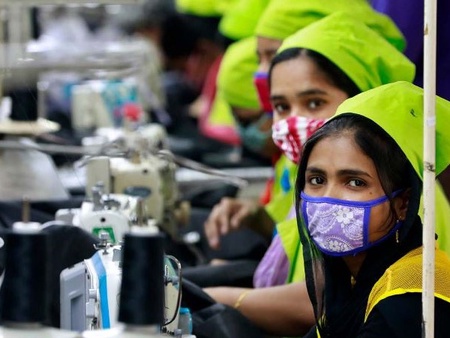 Large fashion brands sourcing clothes from Bangladesh for the UK market are reportedly paying below the cost of production, according to a major new survey of 1,000 Bangladeshi manufacturers published today.

The majority of Bangladeshi factories selling to 24 of the largest global retailers report them paying the same prices almost two years on from the start of the pandemic, despite the cost of raw materials increasing.

Large numbers of high street fashion brands mentioned in the study, ‘Impact of Global Clothing Retailers’ Unfair Practices on Bangladeshi Suppliers During COVID-19’, were reported to be buying from factories facing rising costs for raw materials and nearly one in five struggling to pay the Bangladeshi minimum wage of £2.30 per day.

In total 90% of larger high street brands buying from four or more factories were reported as engaging in unfair purchasing practices in the survey carried out by the University of Aberdeen and trade justice charity Transform Trade.

More than 50% of suppliers reported experiencing unfair purchasing practices, including cancellations, failure to pay, delays in payment and discount demands, with knock-on effects including forced overtime and harassment. Larger brands buying from many factories were engaging in unfair purchasing practices more frequently than smaller brands, according to suppliers. Every brand purchasing from 15 or more factories was reported to be engaging in at least one of these practices.

Bangladesh is the second largest garments exporter in the world, providing millions of garments to the UK market.

“Two years on from the start of the pandemic, Bangladeshi garment workers were not being paid enough to live on, with one in five manufacturers struggling to pay minimum wage while many fashion brands which use Bangladeshi labour increased their profits,” said project lead Muhammad Azizul Islam, Professor in Sustainability Accounting and Transparency at the University of Aberdeen Business School.

“Inflation rates soaring around the world are likely to have exacerbated this even further.”

The survey also found that post-lockdown, garment factories only employed 75% of the workers they had before, suggesting that up to 900,000 workers could have lost their jobs.

Inflation rates soaring around the world are likely to have exacerbated this even further." Project lead Muhammad Azizul Islam, Professor in Sustainability Accounting and Transparency

“This research is a wake-up call,” said Fiona Gooch, senior policy advisor at Transform Trade. “When retailers treat suppliers badly by breaching previously arranged terms, it’s workers who suffer. If a retailer fails to pay the agreed amount, or delays payments, the supplier has to cut costs some other way, and this is frequently passed on to their workers, who have the least power in the supply chain. Reports of being rehired on worse pay and conditions, bullying and unpaid overtime are the predictable result. We need a fashion watchdog to regulate UK garment retailers, along the same lines as the existing supermarket watchdog.

“ALDI and LIDL’s grocery buying practices are regulated in both the UK and European markets, but their clothing purchases aren’t, which is why unethical behaviour persists. We need a fashion watchdog to stop unacceptable purchasing practices of the clothing retailers benefiting from large consumer markets, along the same lines as existing protections for food suppliers. Only when suppliers are able to plan ahead, with confidence that they will earn as expected, can they deliver good working conditions for their workers.”

Nearly two-thirds of the factories reported receiving some financial support from the Bangladesh government or Bangladeshi banks in order to remain afloat.

Of the brands listed in the report, 12 are members of the Ethical Trading Initiative which aims to promote workers’ rights around the world.

“Multi-million fashion brands are extracting their wealth from some of the world’s poorest countries in a form of 21st century neo-colonialism,” said Professor Pamela Abbott, director of the Centre for Global Development at the University of Aberdeen and co-investigator of the project. “Because of the unequal power dynamic between the suppliers and buyers, none of the suppliers who reported illegal contract breaches in the survey took legal action to recoup their losses.”

The ready-made garment industry accounts for 85% of Bangladesh export income, with more than 12 million Bangladeshis dependent on the sector.

The research was funded by the University of Aberdeen through an award from the Scottish Funding Council under the Global Challenges Research Fund (GCRF).