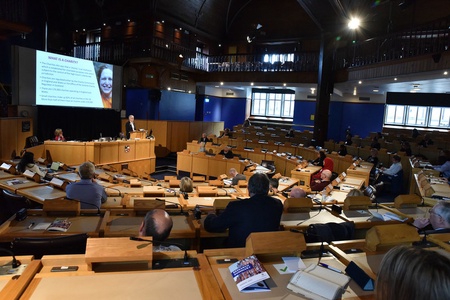 Hosted by Anchor of Scotland Tonight Rona Dougall, the conference included an impressive line up of speakers, aiming to give insight into the future of work, business, and society as we shift towards a new era of business.

Topics included Scotland driving to be the UK world leader for Net Zero as discussed by CBI Scottish Director, Tracy Black. A recognised thought-leader within the Scottish business community, Tracy regularly appears on platforms alongside Scotland’s foremost political and business leaders and has a growing reputation as an essential economic commentator.

Big data, the metaverse and the internet as a reflection of society were all key topic points for Dr Robert Traynham, Head of Global Public Affairs for Meta. Dr Traynham has served in the United States Senate as a communications director and deputy chief of staff for nearly a decade; serving as a chief spokesperson for an incumbent United States President; serving as a spokesperson for Wal-Mart and Comcast and now the chief broadcast spokesperson and head of global public affairs at Meta.

The move towards public transport in the light of global warming, changes to shipping and how businesses should invest in the long term was the focus for Paul Watchman, Special Legal Adviser for UN’s Net Zero Insurance Alliance. With an international reputation as a pioneering lawyer, for many years Paul was a partner of high-profile firms, then laterally an influential academic, advisor to the UN and other prominent bodies and has been recognised with multiple awards.

The topic of the day had then shifted to that of charities and social work, specifically UK political resistance to charities and the undeniable need to shift societal views of social care as a valued profession from Edel Harris, CEO of Mencap, the UK’s largest charity working with and for people with a learning disability.

The final presentation of the day was held by Professor Keith Bender, SIRE Professor of Economics and Business School Director of Research looking at the physical health impact, specifically stress of the "gig economy". Keith's research is in the field of labour economics where he has examined such areas as the effects of institutions on labour market outcomes, the causes and effects of educational mismatch, and subjective well-being in work and in retirement.  Currently, he is the recipient of an ESRC grant investigating the impact of performance-related pay on health.