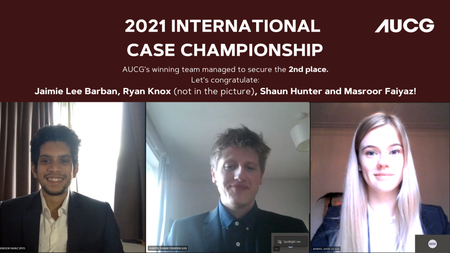 Congratulations to the AUCG for their achievement at the 2021 International Case Championship.

The competition consisted of two challenging rounds and was virtually hosted on the 13th of March. This year AUCG sent two teams who have competed against students from LSE, KCL, UCL, Imperial and other prestigious universities.

One of their teams achieved successfully the second place within the competition. Let's applaud Jaimie Lee Barban, Ryan Knox, Masroor Faiyaz and Shaun Hunter for continuing our success at case competitions!

But we would also like to congratulate the second team formed from Miriam Tiefel, Julia Kihlstrom, Amber Feng and Diana Quezada Ortega for representing our university and the Aberdeen University Consulting Group!

The first round of the competition was focused on HP, a leading hardware, software and service provider. In 2012 the company had taken the first steps to enter the 3D printing industry through an OEM contract with Stratasys, one of the market leaders in 3D printing.

AUCG's teams were challenged to devise a strategy for HP, deciding whether they should stay in the market continuing they partnership with Stratasys, to acquire Stratasys or to cancel their contract and leave the market altogether.

In the second round AUCG's teams were asked to re-evaluate their recommendations under the assumption that a few months after HP decided to implement their strategy, a pandemic caused lockdown measures and disruption of economic and business activity worldwide.