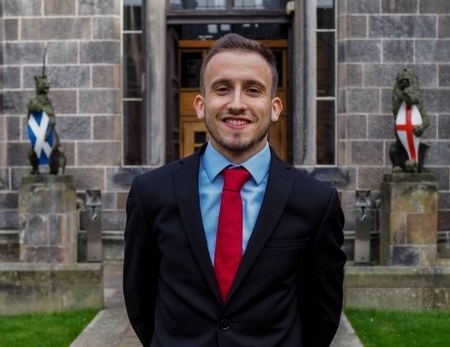 Making the most of his time at university has been a guiding principle for Christian Hristov, who today graduates with an MA in Economics from the University of Aberdeen.

As a University athlete and sports bursar, some of Christian’s most memorable experiences as a student have come on the track, including medal success in this year’s Scottish University Championships, where he won two bronze medals in the 60m and 200m sprint events, and a gold in the 4x200m relay.

Balancing the demands of training, competition, work and study hasn’t been easy for Christian, but he admits that he wouldn’t have had it any other way.

“It might be university related, career related, or sports related, but things like resilience, character, hunger to succeed and work ethic are never developed by simply sticking to the minimum. It’s important to keep moving forward.”

With this as his ethos, Christian has taken part in 92 competitive races over the past four years, collecting three bronze medals, two gold, one silver, and a Half Blue (a traditional sporting award) from the Students’ Association Sports Union. He credits much of this success to his coach Eddie McKenna, who as a member of the athletics coaching staff at the University of Aberdeen has guided him along the way.

As well as his sporting achievements, Christian has made sure to make the most of the opportunities afforded him through his degree programme, including a summer internship with BP at its North Sea HQ in Aberdeen.

Looking to the immediate future, and an internship with Nexen in Aberdeen - along with several athletics events - mean that Christian will be as busy as ever in the months ahead, before he moves on to study towards a Masters in Data Analytics.

When asked for his advice to current undergraduates, he has a simple message.

“Work very hard for what is that you truly want and always have faith, be positive and believe.

“Create a good network of people around you and always be open to learn new things and grow as a person.”