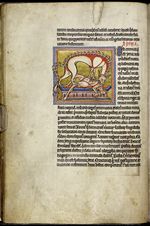 Text The hyena[...] Illustration The hyena should not be eaten because it is dirty and has two natures, male and female[...] Prick marks for pouncing are particularly dense around the man's body and the eyes and body of the hyena

Of the hyena[...] There is an animal called the hyena, which inhabits the tombs of the dead and feeds on their bodies[...] Solinus recounts many marvellous things about the hyena[...] The hyena also [imitates] human vomit and devours the dogs it has enticed with faked sounds of retching[...] If dogs hunting the hyena accidentally touch its shadow behind, they lose their voices and cannot bark[...] In its search for buried bodies, the hyena digs up graves[...] The sons of Israel resemble the hyena[...] For this reason the prophet compared the synagogue to an unclean animal: 'My heritage is to me as the den of a hyena 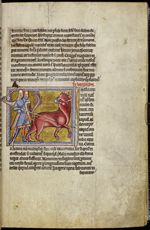 It is true that if the hyena walks three times around any animal, the animal cannot move[...] For this reason men declare that the hyena has magical properties[...] In a part of Ethiopia the hyena mates with the lioness; their union produces a monster, named crocote[...] Like the hyena, it too produces men's voices