Adam names the animals. Adam, clothed and on a throne, gives names to the animals. In Genesis 2:19-20 this takes place before the Fall when Adam was still naked. Here Adam's robes and his gesture of blessing match those of Christ on f.4v and the composition of the picture, with Adam on the left and the beasts in panels around him, mirrors those of God creating the animals (ff. 2r, 2v). Adam's clothes can be both a symbol of the Fall and the vestments of Grace after Redemption. Adam, created in God's image, responsible for sin and man's mortality, is thereby contrasted with God the creator of life and Christ, our source of immortality. Here Adam has Christ-like powers of domination over Creation. This scene illustrates the text from Isidore's Etymology (XII.II .1-8; XII. VII.I-9) in which the animals are named and classified. In several Bestiaries it is inserted in the middle of the account but within a group of six manuscripts it is given additional meaning by its position at the start of the book. (Bestiaries with this scene at the start are St Petersburg, Russian National Library, MS Lat Q v.V.I, f.5r; Cambridge, Gonville and Caius MS 372, f.2; Alnwick Castle Bestiary; Oxford, St Johns MS 61; Ashmole 1511, f.9r) The scene completes the Creation sequence and provides the essential link with the Bestiary text: the etymology of animals' names explains their symbolic role in God's universe. The group on the top right contains the great cats, lion, panther and leopard. Below them are a stag and hind, the wild quadrupeds 'not in man's charge', with two horses 'for use by men'. The next group contains domestic grazing animals: bull, ox, goat and sheep. The ox is a beast of burden and the rest are reared for food. Below Adam a goat turns to face a dog-like creature. The bottom left panel contains a rabbit/hare? and two cats. In the bottom right panels are a sheep(?), another dog and two boars. The dog, with a bushy brown coat, pricked ears and tufty, curly tail is rather like a husky or pomeranian. This specimen is sketched on f.12v. The full-page illumination has a completely gold background; the principal colours are blue, orange, brown and rosy pink. A small amount of green is used on the throne and the dog's hillock. A small amount of pricking is visible on the right edge of the page indicating that the page was originally intended to be ruled. 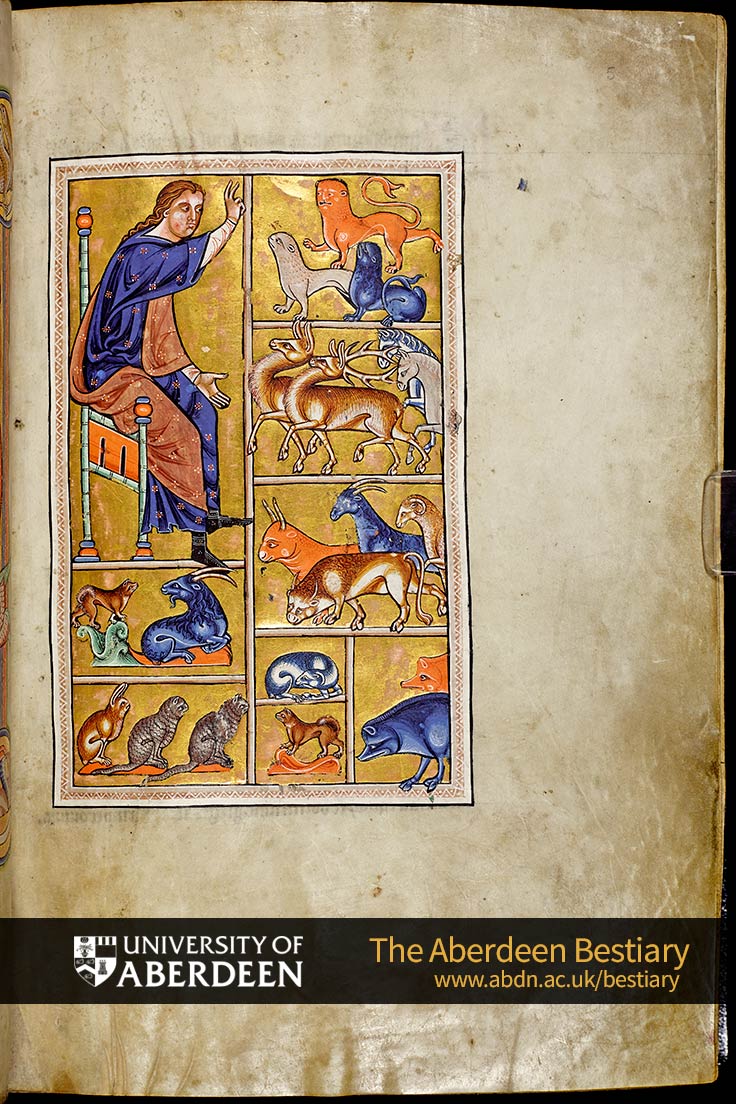