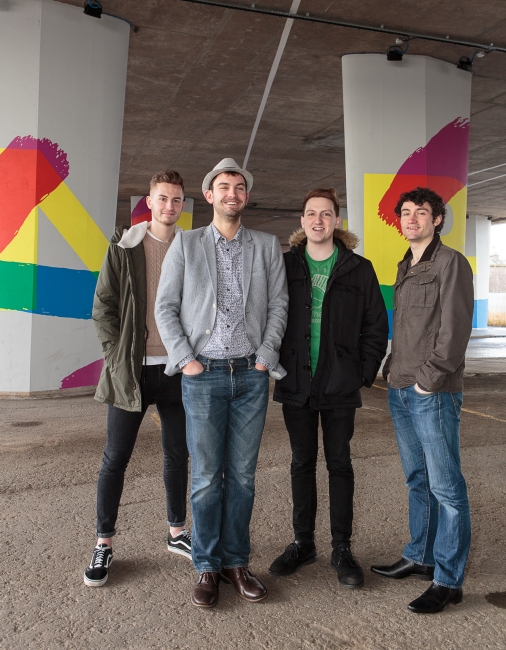 Here are a few of the latest stories featuring some of our University of Aberdeen graduates all around the world. If you have your own interesting news to share then please get in touch!

As a renowned bagpiper who has performed with Queen, the Bay City Rollers, The Libertines and the Kaiser Chiefs as well as playing for the Dalai Lama, Arnold Schwarzenegger and the MOBO Awards in Glasgow, University of Aberdeen PGDE graduate and Dundee primary school teacher Craig Weir is used to mixing with big names. And the 23-year-old has called in the favours from a few of his celebrity friends for the recording of his new band's first single, roping in the likes of Brian May of Queen and Les McKeown of The Bay City Rollers as well as Kyle Falconer of The View, Pete Doherty, Lorraine Kelly and Alan Cumming, among others.

The Highland Road is the first track from his new band Craig Weir & The Cabalistic Cavalry which Craig (23) has started as a side project from his celtic rock band Gleadhraich. It begins and ends with a poem written by him and Canadian friend Chris Brown inspired by a road trip they took along the road of the same name in Canada last year. “The poem inspired me to start this project. It’s based on a highway in Maxville, Ontario called Highland Road,” Craig explains. “Driving along it blew my mind and gave me this vision of Scotland being the centre of the creative universe. That led to my decision to get a variety of musicians I’ve performed with around the world to contribute their voices to the track to express their love for Scotland.”

You can find more info about Craig Weir & The Cabalistic Cavalry here.

Blair Bowman, a 2013 Hispanic Studies Graduate, has carved quite a career for himself in the field of whisky journalism. Having founded World Whisky Day in 2012, an annual event in which hundreds of thousands of people have since participated worldwide, Blair was recently recognised as one of the JCI Scotland “Ten Outstanding Young Persons” for Entrepreneurial Accomplishments and having bagged one of the Scottish awards will now go forward as a finalist for the global JCI “Ten Outstanding Young Persons” award. As well as this, Blair also recently announced plans to release his first book, featuring the WhiskyTubeMap, a unique map that links world whiskies by flavour. The book will be published on this year’s World Whisky Day, which falls on the 20th of May. The Pocket Guide to Whisky is available for pre-order from all major bookshops and Amazon for £7.99.

You can read more about Blair on his website.

Law alumna appointed to RGU’s board of governors

Tricia Walker, a partner specialising in employment law at the Aberdeen office of law firm Burness Paull, has been appointed as a new member of Robert Gordon University’s board of governors. She completed her legal degree and Diploma in Legal Practice at the University of Aberdeen in 2001 before working with Simpson & Marwick then becoming a partner at Paull & Williamsons LLP (now Burness Paull LLP). She is well-respected within the field of employment law and is also a committee member of the Aberdeen branch of the Institute of Directors.

A University of Aberdeen alumna is the driving force behind plans for a new £10 million dolphin-watching centre in the city at Greyhope Bay near Torry. Dr Fiona McIntyre, who has both an MSc and a PhD in the field of Applied Marine and Fisheries Ecology from the University, came up with the idea as a way of making the most of Aberdeen’s deserved reputation as one of the best places to see dolphins in the UK. The vision for the centre includes a wildlife viewing platform as well as a number of amenities designed to encourage engagement with science and education through performance and art, with conference rooms, theatre space and a restaurant. Images of how the centre may look upon completion have been released in the local press and the project has won the support of various high-profile backers including the tourist body VisitAberdeenshire. A fund-raising drive will soon be underway and a launch event is taking place in May.

To find out more about Fiona’s involvement in the project and the launch event visit http://www.greyhopebay.org.uk/

A prolific travel writer, Bachelor of Education graduate David Addison recently released his latest book which chronicles a trip around the NC500, a 500-mile route that takes in some of Scotland’s most spectacular landscapes and has been voted one of the world’s five most scenic road journeys. Early sales of Exploring the NC500: Travelling Scotland's Route 66 have been extremely strong and the book made the Top 10 in Amazon’s travel writing category.

David says “the NC500 has something for everyone.  My approach in writing this book was to see the route as the spectacular backdrop against which historical events took place and the stage on which many colourful characters lived and died.  There must be as many of them as there are miles in the circuit. Some are famous like the good Hugh Miller; some are infamous like the Duke of Sutherland though in fact, the female of the species was the more villainous. There are many you may never have heard of before but that does not mean their stories are any the less interesting. And as well as historical fact, my narrative is peppered with a good number of folktales, myths and legends.”

Along with David’s other books, Exploring the NC500: Travelling Scotland's Route 66 is available on Amazon. You can find out more about both David and the book on his website.

Dr Véronique Forbes, an honorary research fellow with a PhD in archaeology from the University of Aberdeen, was recently awarded a Marie Sklodowska-Curie Individual Fellowship. The two-year fellowship will allow Véronique to conduct a two-year research project at the University of Bordeaux on the topic of forensic archaeoentomology during which she will investigate a new approach to the study of prehistoric conflict.

University of Aberdeen Law graduate Timipre Wolo was recently nominated as a finalist in the Professional Achievement category of the British Council’s Study UK Alumni Awards in Nigeria. While she didn’t ultimately win, even to be nominated for the final is in itself a tremendous achievement. Timipre’s story is certainly inspirational – she has worked incredibly hard and fought various preconceptions and family tragedy to become a successful lawyer as well as co-founding the Greener Nigeria Initiative, an NGO focused on the environment, and championing a number of youth empowerment initiatives. Her prolific and tireless work has been recognised by various bodies including the African Women in Leadership Organisation who awarded her the African Woman of Worth Award. Earlier this month she returned to Aberdeen to address the International Women’s Day Conference 2017 and shared her story as part of the day.

You can read more about Timipre here.

Cameron Taylor, well known for his book and DVD about the real Macbeth, has published his third book, Welcome Home, Prime Minister.

Graduating with a degree in History from the University of Aberdeen in 1979, Cameron joined the Civil Service and from 1983 to 1985 served as a Duty Clerk at 10 Downing Street, witnessing at first hand Margaret Thatcher's remarkable premiership. In his affectionate and sometimes funny recollections, Cameron encounters a Prime Minister in her nightdress, describes being held at gunpoint in Moscow and at lance-point in Cairo, and shares the story of a surprising conversation with the late King Hussein of Jordan. In October 1984 he was on duty during the weekend immediately following the Brighton bomb explosion and was the first person at Downing Street to greet the Prime Minister and Mr Thatcher on their safe return from Brighton - 'Welcome home, Prime Minister.'

Having recently returned home to Orkney after living for the last ten years in Forres, Cameron's two previous books - Rooted in Scotland and On the trail of the real Macbeth - were published by Edinburgh-based Luath Press. Welcome home, Prime Minister is published by Craigflower Cottage. Commenting, Cameron said "I'm delighted to have launched the book, a personal account of two years at 10 Downing Street where this young civil servant found himself a long way from home. I hope people enjoy reading Welcome home, Prime Minister as much as I enjoyed writing it, reliving a unique experience."

The book has been published digitally on Amazon Kindle.

Dr Chris Heppell, a recent PhD graduate, has just unveiled a brand new photography exhibition in the events area of the Sir Duncan Rice Library. The retrospective exhibition incorporates work from the past 7 years taken while Chris studied for his MLitt and PhD at the University of Aberdeen. Using colour film, an early 1980s Minolta SLR camera with a light leak, and degrading or out of date film, he embraces the contingency of over-exposure, ultimately hoping to render the surface of the photograph contestable while transfiguring the everyday subject matter that Chris encountered on frequent walks through the city of Aberdeen.

You can find more information about the exhibition here and it can be viewed in the events space on the ground floor of the Sir Duncan Rice Library until the 8th of May.

A former international student of the University of Aberdeen, Nancy Schumann, has recently had a short story published in a collection of sinister tales entitled Into The Woods. Nancy, who studied in Aberdeen between 2000 and 2001, is a German writer who is now based in London. She writes poetry, short stories and novels on a variety of topics in both English and German and her works have been published in both languages. Nancy’s particular interest, both in fiction and academically, are female vampires, about which she has been researching, reading and writing for several years. She attained a master’s degree in English Literature from the University of Leipzig, Germany and has had a variety of gothic and vampire-related fiction and non-fiction published over the last few years.

Her MA thesis formed the basis of her book Take A Bite, a thorough and engaging analysis that puts women centre stage and traces the development of blood-sucking figures from their origin through to Le Fanu’s Carmilla and Bram Stoker’s Dracula, before concluding with the Twilight and True Blood sagas. You can visit Nancy’s website here.